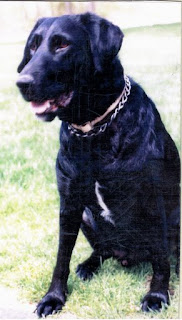 There's a black Lab pup in the neighborhood. When his human mother walks her at night, she's Christine. By day, when human mother's mother-in-law walks her, she's Ebony--and only because that's what her son and his friends think works best. Life in the suburbs...

The puppy and the name game got me to thinking about my own black Lab who's been running with the hounds of heaven these past few years. He came into my world when I was living in Northern Ireland. His name was Cuchulainn, and he came by way of a friend in Belfast who rescued him from a hobo for 50 pence. We named him for the Irish mythological figure Cuchulainn, a youthful hero who can do amazing feats and always protects Ulster from invaders. There's nothing like a canine protector with heroic pretensions.

Except that this beautiful animal was incapable of pretensions. He lived joyfully, chasing geese, rolling in the grass, swimming after his tennis ball, drooling for sausages, chasing the canine ladies....

Everyone loved this animal with the crazy name.

Back in the 1990s, we lived in an interface area in North Belfast, which meant that loyalists and republicans walked their dogs in the same park. To give a dog the Gaelic name of an Irish hero is to declare your hand. When the response, "Wha's tha' yer sayin'?" came in reply to the answer to the question, "What's the dog's name?" told us our company dug with the other foot, though it didn't matter. So they called him Cu. And Cu he was, the lord of his own manor who could jump miles in the air to catch a ball and spin and flip and roll in the process. He was his alter ego in many ways. Like every Lab in the world, he was a happy, silly kid. Like many happy, silly kids, he was full of love and made people happy.

And, as dog people know, there's always the dog to talk about when people stop you along your way. Dogs are better at human relationships than humans are.

Cu was a year old when a British undercover agent posing as a student reporter entered the Sinn Fein Press Office on the Falls Road of Belfast and shot the brains out of Paddy Loughrin, the man who found Cu for me. The Brit's name was Adrian Moore, and he killed a few others in that office before he drove off and blew his own brains out.

Moore never met Cu. If he had, he might have realized the foolishness of his political life and shed the loneliness of loving a cause--the British government--that certainly didn't love him back. He was so caught up in his job he didn't realize life could be a walk in the park, whatever your name is, whoever you are.