The Story of Birdnest Girl 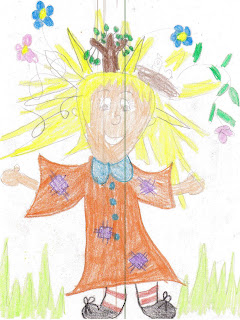 This little story began in a conversation between me and Adella today when we discussed the state of her hair. We began the narrative by drawing the picture together. Then she started with the first sentence, gave it to me for the second, and on and on around the room until we had this collaboration between four adults and an 8-year-old girl. Della is responsible for resolving the seeds of anger problem.

Once, there was a girl with very messy hair. She was a lovely girl who was always very busy being happy. She went out to the bird feeder, and the birds were happy that they could land on her, though she did not at first even realize that they did so. Though they were unaware of each other, they were happy together.

The birds got busy and began making a nest in her hair. She still didn't notice them, though. She was always very busy playing outside.

There were no worms in her hair, so the mama bird brought brought back seeds from her travels. Unfortunately, they were the seeds of anger.

Now, the girl was mad at everybody she met. She stopped playing outside and sat in the gloomy darkness of her room. had to sit in her room with books and try not to be so angry.
The birds were sad about being inside, so they were quiet, and she remained unaware of them. Her head was itchy, though and she scratched her head all the time.

"What was that? What is wrong?" the girl asked as she shook the pain out of her finger and scratched her head again.

Just then, she heard a little birdie singing in her ear.

"Where did that singing birdie come from?" the girl asked. She was starting to feel happy again as she listened to the song.

"I've been here all along," said the little bird. "My mama built a nest in this leafy tree just before I was hatched."

"Well, up here you certainly look like a tree. Your hair is a yellow mess. A small tree is growing on top of your head. You have leafy vines and flowers growing everywhere and, of course, me and mommy's nest--and it's a comfy one, too."

"Well," said the girl, "I love to hear you sing. But what do you eat up there in my messy hair?"

"The seeds of anger. We eat them so there will be no more anger in the world," replied the bird.

Then the girl said, "Won't you run out?"

"Why, yes," said the bird. "But my mom isn't here because she is hunting for more. We don't like it when you sit alone because you are angry."

"But how will she find her way back to you?" the girl asked.

"She will do a certain chirp and I will reply. I keep chirping until she comes back."

The next time it rained, the little girl made sure to take a walk outside. A magical breeze arose and straightened out the tangles of her rain fresh hair. The girl felt beautiful, and she danced along in time with the little bird's sweet call to mother.
(c) Sandy Carlson and Adella Carlson
Story of Birdnest Girl