Blog Your Blessings Sunday: the Gift of Memory 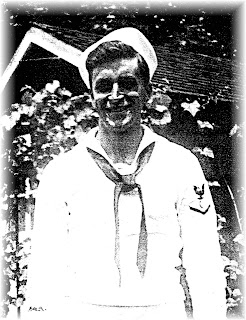 Laurence Isbell is a great-uncle I never knew. He was the fourth of six siblings--the first was my Uncle Bud and the second was my Grandmother. Uncle Laurence was a submariner during the Second World War. He was under age when he signed up because he was so troubled by Pearl Harbor he couldn't stand staying home. His going broke my great-grandmother's heart, but she knew there was no stopping her son. I have written about this uncle in my book Silent Spaces. The book includes this devastating letter from the Secretary of the Navy to my great-grandparents. As we approach July 4, I pray all Americans will think of whose we are.
YOUR SON, Lawrence Isbell, Ship’s Cook third class, US Naval Reserve, has been carried on the official records of the Navy Department in the status of missing in action as of 5 July 1944. He was serving on board the USS HERRING when that submarine failed to return from patrol operations in the Pacific area.


On 21 May 1944 the HERRING took aboard fuel at Midway Island and departed to patrol waters in the vicinity of the Northern Kuril Islands where she was likely to encounter the enemy.
A War Patrol Report of the USS BARB discloses that the HERRING and the BARB rendezvoused on 31 May 1944 as had been previously scheduled. At the time of the rendezvous it was determined that the HERRING would patrol the area North and East and the BARB the area South and West from Matsuwa To, Japan.

A few hours after the ships parted company, the BARB picked up sounds of distant depth charge explosions, indicating that the HERRING was involved in an attack. Several hours later, the BARB rescued a survivor from an enemy escort vessel which had apparently been sunk by the HERRING.

On 3 June 1944 messages were sent to the HERRING and the BARB, and both ships were ordered to acknowledge these messages within three days. No acknowledgment was ever received from the HERRING. According to her schedule the HERRING was to depart from her patrol area on 26 June 1944 and to arrive at Midway Island on or about 3 July 1944. She failed to return and no message or other communication was ever received from her.

In view of the length of time that has now elapsed since your son was reported to be missing and because there have been no official nor unconfirmed reports that any of the personnel of the vessel survived or were taken prisoners of war, I am reluctantly forced to the conclusion that your son is deceased. In compliance with Section 5 of Public Law 490, 77th Congress, as amended, the death of your son is, for the purpose of termination of pay and allowances, settlement of account, and payment of death gratuities, presumed to have occurred as of 17 January 1946.

I extend my deepest sympathy to you in your sorrow. It is hoped that you may find comfort in the knowledge that your son gave his life for his country upholding the highest traditions of the Navy. --James Forrestal, Secretary of the Navy, January 28, 1946
Laurence Isbell Pacific Theatre submariner USS Herring veterans WWII