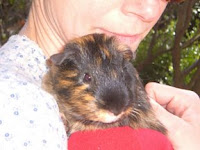 Click here for a Friday Flick about a friendship that emerges in an unlikely place. (Thanks to Speaking of Faith for publishing this slide show.)

On a similar note, I find myself marveling at the intersection of life forms and how caring can extend beyond the bounds of our own little species.

The other day, as I lowered Alpha Pig--Tapper--into the warm and sudsy water of his medicated bath, I could feel his little guinea pig heart beating against the middle of my forefinger as he rested his front paws on the same finger. Unlike the first bath six weeks ago, he didn't fuss or squirm. Finally, I was getting it right. I held his body in the loose O formed by my thumb and middle finger so I could soundly scrub his back with my free hand, and he rested calmly.

As I rubbed the muck and yuck out of his fur, I realized I wouldn't do this for anybody else but Tapper and his first mate, Delmo. I have been committed to this effort to cure the guinea pigs of every mite that ever walked since the mite problem emerged early this summer. For these two animals, my husband and I have spent about $500 in vet bills, ivermectin injections, and medicated shampoo. Why? Because we love them. Because they rely on us. And because you care for your friends when they're ill. When you care, you care. No need to wax philosophical over why.

Of a piece with this is the story a friend told me today about his encounter with a mama duck and her chicks, who had taken up residence on the roof outside his office window at the university where we work. One morning, he and some friends who were getting ready to go running were looking out the window when then noticed one chick had fallen to the ground, and the mama flew down to protect it. Then she tried all the doors and windows on the ground floor of the building to get back up to her other babies with this one, but she had no luck. How would she get the baby back to the roof?

My friend called the campus police, and one of the cops came. They went out on the roof and got the other chicks and brought them down to the mother. "The cop wasn't really interested, but then you could see this macho cop was getting into it," my friend said.

"I saw him later and he said he felt kind of sad after because the three of us took off in a line to go running, and the mother and chicks went off in a line in the opposite direction, and he was left alone."

Why would anybody spend time on baby ducks? Because when you care, you care. Cops and college professors, ducks and guinea pigs, dogs and polar bears. It's all possible.