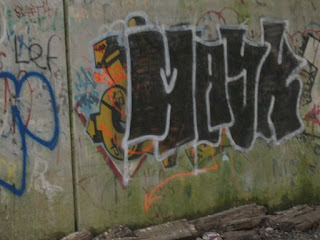 The ages-old debate about photography's being a documentary science or an art form came to the surface recently following my publishing a graffiti video on YouTube for Strange Attractions. A graf writer didn't like one of his pieces, which I had photographed, and asked me to take down the video that included an image of this piece.
I gave the request thoughtful consideration. Then I complied out of respect for this guy as a friend of a friend and as a writer. Then I put it back up out of respect for my own work.


I thought about my obligations to him and to myself, artists telling different stories. His objection was not to my photo but to his painting. My photo was not about his painting but about the crazy places people find to paint big and in peace and with friends. His work was his and mine was mine.

This brings to mind a situation in which I asked an author for permission to use his photo of a graffiti piece in California. He said yes to the tune of $500. The irony at the time left me bemused. Here was a photo of a graffito, ownership of which only the owner of the wall could claim. Now the photo of this outline of a horse was a commodity. I have made a point of posting all of my graffiti-related photos on Picasa and linking those public albums to my Strange Attractions site because I found this to be so obnoxious.

How can a person who challenges notions of ownership claim to own anything? Can a writer claim to own the art in, and of, the photo? If he ripped off someone else's wall to paint, can a writer rightfully talk about his property rights? More important, who has a right to dictate what and how another sees?

There is a junk store on the Connecticut-Massachusetts border that is about as picturesque a pile of junk as you can imagine. Outside the place is posted a sign prohibiting anyone from taking pictures. Really. The silliness is rivaled only by the self-importance of it.

Graffiti is about looking at the world around you. I respect graffiti writers for making us look at where we are and making us think about why we're here, what we value about being here, and the like. It's about a process that is as old and as sacred as it is beautiful. You can paint all over my world if you want, but you can't tell me what I see,how I see it, or how I make it mine.

(The image above of a graffito in Brookfield,Connecticut, is not the one about which I write here.)
Connecticut Strange Attractions: Exploring Graffiti