The Monks of Burma: Soft Buddhas 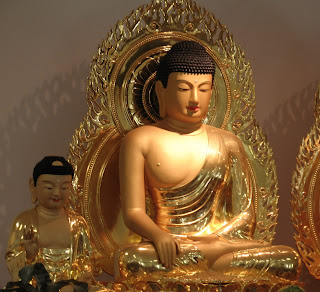 Images and effigies of the Buddha very often reflect the time and place in which they were created. The created reflects the created rather than the historical figure Siddhartha, whose journey from wealth and comfort to humility to nirvana is the foundational myth of Buddhism. That's as it should be because the Buddha, the enlightened one, is to be found within ourselves.

If a Buddha figure is made of gold, he stands as a metaphor for the beautiful virtues that reside within each of us. To look upon a gold Buddha is to reflect on our own golden nature. To see a gigantic Buddha is to see the magnificence of an enlightened soul. To see the figure as a source of power unto itself is to miss the point. The role of sacred arts is to turn our sight onto our souls, not the object itself.

This conversation on the nature of monuments led a friend and teacher to create a soft Buddha. His Buddha suggests the warmth and comfort of compassion. The figure is small and approachable. His halo is damaged and taped together because the road to enlightenment brings with it pitfalls that can be painful or harmful.

Taken together, these Buddha's describe the human experience. Though nobody is perfect, everyone has a place.

I thought of the soft Buddha when I read about the Buddhist monks killed in Burma in a larger crisis concerning the Burmese junta's abusive regime and its literally taxing individuals out of a meal. Here were these soft Buddhas--monks of golden character and concrete courage laying their lives on the line that the suffering might end for the people of Burma.

There's nothing more moving than committed compassion rising against the force of deliberate despotism. The argument is over. The violent response of a bankrupt regime and its guns, rubber bullets, and tear gas speaks to a profound poverty of spirit. Whatever the whole story is in Burma, these images remind me that it's possible to break free of the cycle of suffering and be the change; in fact, it's possible to become bulletproof.