Of Course It's All About Me 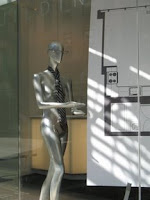 Any job worth doing is about the person doing it. Passion and commitment are conditions of the heart; how can a task be about anything or anyone but yourself if your heart is driving you to do it? It's not possible.
Dad
I think of my father, who was a passionate, committed union man throughout his professional career. I asked him once what brought him to union involvement. He said he wanted to live well, just as well as the guy he worked for. When he fought for benefits--from health, to time off to tuition reimbursement--he was as much interested in his own well-being as that of the unnamed hundreds whom he represented as leader of his union. He identified so completely with his work and with the people for whom he worked--they had the same needs, after all--that there was no difference between doing something for himself and doing it for the next guy.

Dad is neither selfish nor paternalistic. He is completely about everything that he does. To paraphrase Gandhi's definition of happiness--his words and actions are in sync with his thoughts.

Mom
Mom is the same way. A woman with a large extended family who more often than not shared meals round the same table and lingered long for conversation, she was a waitress who worked the way she lived. She, like dad, is transparent in that most marvelous of ways. You never have to wonder who she really is; she is right in front of you being herself. Back in the day, she made of Friendly's in Bethel a breakfast table nobody wanted to leave.

Her kindness is not a conscious act of benevolence--she never patronizes anybody--but her way of being.

Me
I teach writing to young people whose academic work is poor but who have been accepted by the university so long as they pass my class. It's my job to take these kids who write like third graders and in one semester teach them to write like adults.

These are the kids who fell, as the saying goes, between the cracks. I see them as outsiders looking into a world that has always given them the cold shoulder for not being in some way desirable. Really, they've been rejected by their public school teachers who chose to move them along rather than teach them; now they are on the cusp of being rejected by a university unless they find some way to write effectively.

As a writer, a loner, and a misfit, I fit right in with these kids. I too endured teachers whose instruction amounted to saying the same thing twice, slowly. If you got it, good. If not, to the back of the room with you.

Nonetheless, I learned at pivotal moments the profound importance of writing effectively. Before my grandmother died, I wrote an essay about how much I loved her and why and had my folks give it to her. She told me the last time I saw her that nobody ever wrote her anything as beautiful as that. Ironically, I had thought to keep that essay secret. (Writing them was a form of recreation for me then.) But on impulse addressed it "Dear Gram" and sent it along.

Our last moments alone together were profound, full of love and peace. Words placed in the right order at the right time got me there. For me, writing is my heart and soul. For me, teaching is all about me because I feel marvelously, seamlessly connected to my marvelous, smart students as we stand together on the edge of a very beautiful world, look in, and practice writing love letters to you.

anything worth doing is all about the person doing it