Find Your Way in and Just Keep Going 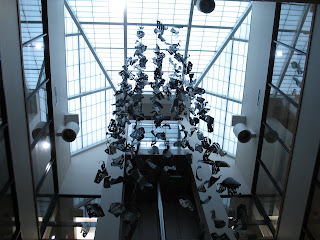 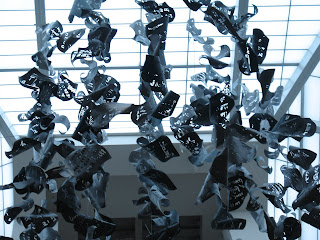 This is a spun steel sculpture entitled "Illuminata" that flows from the lit "Rosetta bowl" in the atrium of the Ruth A. Haas library of Western Connecticut State University in Danbury, through the reference section, and up five floors to a skylight. Oregon sculptor Clark Wiegman's 2002 work consists of almost 1,000 sheets of historic and scientific manuscripts and covers 3,600 square feet.

Commissioned by Connecticut Commission on the Arts, "Illuminata" is grand and impressive. It also invites you to become an active part of all that knowledge as you make your way into the library. Text from all over the world merges and blends and swirls about in this place, but there is also plenty of room for new, more, and maybe even better in the spaces between the sheets.

My daughter called my attention to the work on Columbus Day, when she came with me to work. After my first class, we sat in the library and colored--or I colored and she watched the glass elevator move through the text. She studied the thing for the better part of an hour, sometimes making comments about the elevator or the images on the pages, when I asked her if she wanted to go to the top and see all of it up close through the glass.

Her face lit up over the prospect of an elevator ride through a sculpture. After we did it and returned to our seats, she asked if she could go off and use the bathroom. She wanted to go down the hall and around the corner by herself. She trotted off with all the confidence in the world.

Her time with this work of art had some affect on her. During my second class, she seemed so much more at ease than during my first. This time she did not stick close by but sat in the front of the class on her own. She wrote out an interview she had done with grandpa about his pinball prowess and drafted a short story about characters on her T-shirt who come to life when she sleeps.

On the way home I thought about her confidence. The campus is full of big, imposing buildings full of books, computers, desks, and people in a hurry if they're not out to lunch. She wasn't bothered after she took in the elevator. She focused on something and made sense of it. In this way, she found her way into a world of knowledge and possibilities, and she just kept going. It was no longer too big or in any way beyond her. She had no fear.

What a role model for a mom.