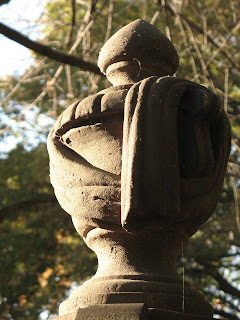 I posted a photo of a figure at the gate of Riverside Cemetery in Waterbury, Connecticut, for my Weekend Snapshot last week, and the photo elicited as many "that's eerie" responses as "that's peaceful" ones. Riverside is a sprawling park flanked by Interstate 84 on one side and working-class housing on all the others. Despite the rumble of the highway and the endless flow of Waterbury traffic, the place is a beautifully serene park. The rest of the world just doesn't exist as you take a giant step back in time there.

It's fun to be there and to photograph the wonders of funerary art that dot the landscape. The trees and other plantings also offer a glimpse into the past and what constituted the beautiful. I was intrigued by Riverside this week and found myself looking deeper into Victorian cemeteries. Here's what I found.

1. Park-like cemeteries out on the outskirts of cities and town came into being in the US in the 19th century to prevent the spread of infectious diseases from closely piled rotting corpses.

2. The need for such burial grounds coincided with a changing aesthetic that focused on the living here and now rather than the dead and life beyond.

3. Romantic ideals overtook the strict Puritanical view of eternal damnation as the burial plot became a temporary earthly resting place before reunion in the afterlife.

4. Influenced by the European garden cemetery movement of the 19th century,

5. Cemeteries were designed to be a pleasant place to visit and to commune with nature--itself a means to the spirit world.

6. The cemetery as a town with its paths, gardens, and monuments made it possible for mourners to approach death with a positive attitude. (more)
Thursday Thirteen No. 5: Grave Matters