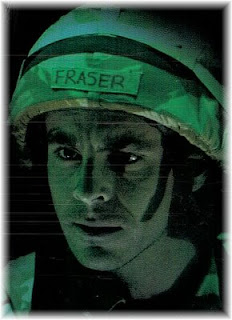 This week's blessing is the play Black Watch, which I had the pleasure of seeing at St. Anne's Warehouse in Brooklyn, New York, on Friday evening. It is a beautiful, complex work of political art. Black Watch is a production of the National Theater of Scotland written by Gregory Burke and directed by John Tiffany.

On one level, the drama captures the real experience of soldiers of the Black Watch regiment in Iraq. On another, it is about the problem of transforming the myriad ineffable experiences of being a soldier into a story--something that can be communicated to a world that often sits in judgment of soldiers as otherwise unemployable fools.

The story begins in a Scottish pub when a writer begins interviewing a handful of soldiers who have left the regiment about their experiences. The soldiers are not able to communicate their memories through language; discourse immediately dissolves into sentences broken up with the F word--or with streams of the F-word interrupted by poor attempts at complete sentences--as the soldiers struggle to get to the heart of their lives as soldiers, which is to say to get to the heart of themselves.

Black Watch dissolves the line between time and space, your reality and mine, as it merges TV monitors, documentary footage, letters, dialog, soliloquy, ballads, song, and dance to get to that unique and private place at the heart of these fighting men.

In the end, the soldiers do not retell the story but relive it in a sequence of vignettes that include an elegantly choreographed retelling through narrative and costuming of the history of the regiment and an equally elegant parade in which the soldiers march, fall, lift each other up, march, fall, lift each other up, without ever missing a beat or forgetting what they're about.

The combination of history, community, hunger, and a desire for adventure cause the young men of the Black Watch Regiment to sign up and fight. They whys and wherefores are complicated, but they come down to young men making deliberate choices. They are not victims. They are individuals with personalities and strengths of character--despite the boredom and the adolescent tomfoolery that often overtakes them even in Iraq.

"When the soldiers of Scotland used to fight, they would have people who stood in front of the soldiers and recite the names of their ancestors. In the end, our soldiers don't fight for Britan or for the government or for Scotland. They fight for their regiment. Their company. Their platoon. Their mates," says Black Watch author Gregory Burke in the playbill.Watching this play, you can see this makes perfect sense even when war makes no sense at all.

This 110-minute non-stop performance made me think of all the men in my family who have served in the military. I thought especially of my great-uncle who came home from World War II when the thing ended. He had placed his cap on a pipe in the basement of his mother's home. It stayed there for 50 years, when his niece bought the family home and renovated it. My uncle tucked the cap into a dresser drawer at his nursing home and that was that. My uncle was a meticulous man who didn't leave things laying around and who was never at a loss for words. When I was a young girl, he once showed me a stamp that depicted the kind of ordnance he used to fix when he served in the South Pacific. "When you test fire, you are all by yourself," was his commentary on the war. That was it. What happened over there? It never seemed right for this young girl to ask. Black Watch took me inside his silence.