Blog Your Blessings: My Zombie 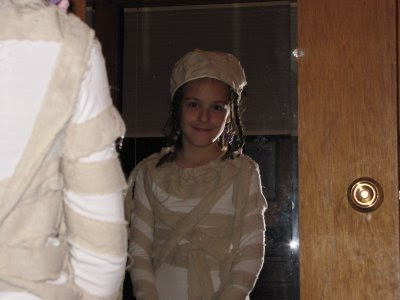 This week's blessing is my beloved little zombie--my daughter, Adella. She sang and danced and read a few lines in the fifth grade musical this week. Her music teacher had written an original score celebrating the music of the 80s, so the production naturally included a rendition of that unnatural dude's "Thriller."
If you're going to dance like a zombie, you have to dress like one, too. Two days before the show I heard from the little voice in the backseat that a zombie costumer was needed. Two as in slightly more than one because the first version of the story was that the costume had to be ready the next day. So it was a mad dash--a frenetic scrounging--to get the stuff together to turn my healthy girl into a days-old dead thing back from the crypt.
"Two days' notice can't be right," as I hot glued torn strips of muslin to my daughter's white T-shirt and shorts. It wasn't adding up. "Don't tell the social worker I hot glued you into this thing; I could never explain it," was all I said, though. I glued her in so well she couldn't get out. "Sleep in it," I suggested. And then I cut her out for the night.
She was quite the dancing zombie the night of the musical. She was also the only kid dressed like a zombie. This pressing need was quite a private affair.
Either the other parents don't succumb to pressure the way I do (I grew up in a household in which doing what you were told was the cardinal virtue.), or my daughter was bent on doing the zombie thing right. Or both. And that's very cool in my book. Amen.
Blog Your Blessings
Blog Your Blessings