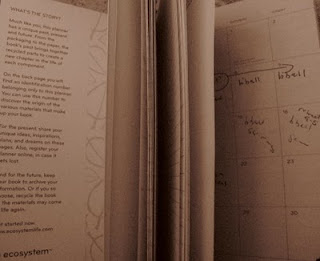 Now you've got to bond with the WhoeverItIs.com that manufactured the thing like you're friends.
Or something.
Buying from leads to bonding with. So it goes in the age of social networking. We invite everyone up for a night cap.
For example. I bought a very old-school pocket calendar for myself at Barnes & Noble in December before the big mark downs. I just wanted one so I could make a decent effort at not forgetting all the dates that I have a habit of comprehensively screwing up year after year.
I had wanted the Moleskine I had seen at Border's, but there were non on deck at B&N, so I settled for the one the cashier said was near the coffee, which I didn't want but which put me in the cozy, happy mood to buy something because it was so near the coffee.
The Ecosystem calendar published by sterlingpublising.com stayed in its wrapper until after Christmas--which is to say Monday.  I'm not good with calendars.
When I took the celophane wrapper off the thing, I was prepared to add all the dates I had already missed (for next year), but I was sidetracked by the biography of my calendar printed inside the book. This was an explanation of the recycled nature of the journal on the front cover and the unique number of my very own journal printed inside the back cover. If I went to the publisher's web site and typed in that number, the book said, I would find out what the thing was made of and could register it in case I lost it.
"I can't believe I'm doing this," I said to my daughter as I went to the Sterling Web site.
"Nobody's forcing you, mom," she laughed.
"I know," I said.  "I can't believe I'm curious about this."
Anyway. I went through the paces just becase, as my daughter said at the beginning of this thing (though I did not give her credit), buying a calendar is not just buying a calendar anymore.
When I registered my blank little date book at Ecosystem Life, I learned where the pages, the covers, the binding, the ribbon book mark, and the elastic were made. I learned how many people work at the places where these things were accomplished. In short, I learned that almost 150 of my New Englander neighbors and some folks in Pennsylvania and Wisconsin made my datebook. My $10 played a role in their employment.
Buying a calendar is not just buying a calendar anymore. Now you can't rip off the wrapper without knowing you hold lives in your hand. The real world, the one you can touch, is a cool place.
And, oh. What are you going to do with that wrapper?
__________
PS I thought later this sounds like one of those paid-for posts. It isn't. I just love that this publishing company invites its customers to think of how many people are affected by their purchases. Worth thinking about.