My World Tuesday: The Namless Tornado That was not


Mother Nature packs quite a punch.  On Thursday, we in Woodbury, Connecticut found that out when she socked us but good when several micro-bursts (not tornadoes, apparently) touched down here, leaving trees lying across wires like babes in arms,  slammed into streets, on top of cars and homes, and leaning against other trees in the woods. It was a wild storm that left us without electrical power for more than two days.

It was awkward.  It was frightening.  But we did not die. 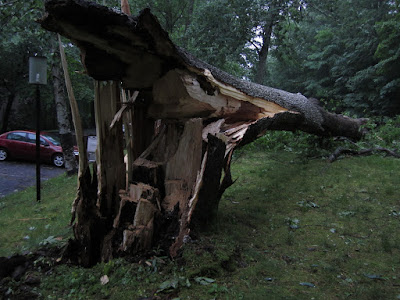 Instead, we walked up and down our little road and told the tale, mixing and mingling with neighbors we otherwise had not had the time for.  Neighbors spoke of being in their cars and trapped between fallen trees, floating in that water-filled space for more than an hour (an eternity) while waiting for some guardian angel with a chainsaw to show up and carve the way to freedom.  Others left their cars on the main road and walked under the slack power lines to get home to their waiting dogs.  Some little girls wondered how a strong and healthy maple could have fallen if they had wrapped duct tape around its trunk just a few days before.  (Some things can't be explained, I told them.)  EMTs came in to be available for the elderly and infirm among us who just might need help.  A contractor of some sort with an 8-pack of lite beer decided the party might as well be there and then if the trees were going to keep him where he didn't want to be.  It was, after all, Friday night.

Though the middle managers of the electric company did all they could to thwart progress, the men in their Carharts dug in and planted new utility poles, moved wires, and put our world back in place within 48 hours.  They had the help of arborists and the police.  Lots of people from far away pitched in, too.
Through it all, we had to laugh.  My neighbor shouted to me this afternoon, "How are you managing?"  I replied, "I feel like a Girl Scout on a camping trip!" He said, "Not really.  You have water; can take a shower!"
Which is to say, say what you want, life is good.  We have water.
And we did not die.
I kind of enjoyed the lack of electricity.  I felt strangely relaxed--sleepy all day, in fact.  l liked it though I did miss blogging and keeping up with email and the like.  But it was nice to let go and be tired.  And sleep.