By SandyCarlson - June 25, 2011
I visited the Karen Beasley Sea Turtle Rescue and Rehabilitation Center yesterday. There were about half a dozen turtles being introduced to the public. Among them were Lennie, the blind Kemp's ridley who is a permanent resident at the hospital because he is blind. A fisherman had struck him in the head and tossed him overboard--hence, the blindness. He was swimming in a tank alongside another, younger Kemp's, who had dislocated his shoulders in another fishing net. The interns said this was a common injury among these endangered little guys.

I learned today that the most common injuries of late are head injuries and body trauma caused by propellers and by impact with boats. There were a few banged up loggerheads whose shells were being put back together with stainless steel bands. When the turtles come to the surface of the water for air, they suffer these injuries.

There was a little loggerhead who had been cold stunned and was getting her strength back to be ready for release. She was happily chowing on some romaine lettuce to pass the time.
Our guide peppered her facts and figures with anecdotes that were heart-warming. There was the one about the family from New Jersey who rescued a sea turtle and drove it to Topsail Beach for care. When the turtle was fit for release, they drove down for the big moment. Then there's the one about the Coast Guard flying another turtle home to Florida for release. Seems if you need help, all you have to do is ask because, as the lady said, "If they can do it, they will do it. And they're happy to."
A regular visitor to the hospital, I knew enough to be early for the tour. I was among one of the first groups to hear the stories, and I had to move through hundreds of people to get back to the road to get to my car. Powerful stuff. And important.
Back at the ranch, the babies are incubating in the sand.... 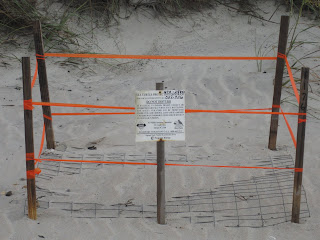 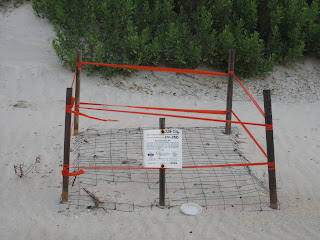 And this little tortoise was trying to cross the road at dusk. I helped him out.  I hope he doesn't have height issues!  I never saw one like this before.  He really did blend with the pavement--not a good idea! 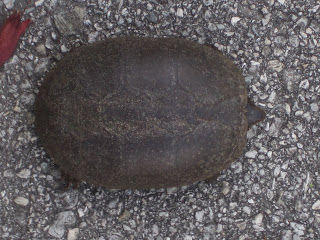 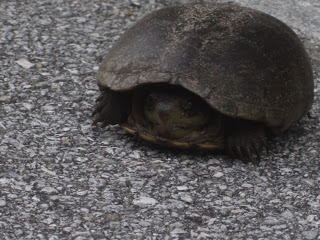