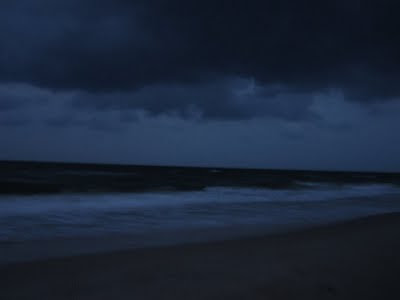 Space Race as a proper noun refers to the competition between the US and the USSR during the Cold War to fly to the moon.  Being first would mean being smarter, stronger, mightier.  Exciting stuff.  And then the world went on.

To my way of thinking, space race as a common noun means finding some.  During the summer, the space race at the beach involves getting a decent spot for the blanket before the sand sculptors, hole diggers, and families with their tents/awnings/lawn chairs/bocce sets/fishing poles claim their quarter acre on land and in the water.  (We have to think of those mercenery sharks coming to shore for a free lunch even at the end of a measly hook, and we have to move along....)
I think this space race is best won at night, well after folks have packed up their junk and returned to the comfort of their couches and the familiarity of TV.  Then the beach is yours, the sky and the ocean are wide open to your dreams, and the cool sand seems happy to know you.  I took this soft, blue shot one evening very late when my daughter and I were out walking the perimeter of paradise one last time before bed.
Header Challenge