By SandyCarlson - December 25, 2012
After a beautiful Christmas at my parents' home in Newtown, we went home by way of the center of town. We saw the memorials to the 26 victims of the Sandy Hook School massacre of December 14. We didn't want to gawk or be a part of what's trending; we wanted to see what we feel so much a part of because--like the people from all over who have reached out to Sandy Hook--we are human beings.

Viewing the memorials and messages, I thought of the media and the flak they have received for totally goofing up the story in the first place and then for sticking around to get the story in the second. I remembered rolling up and down the radio dial on the way home from work December 14 and catching reporters taking in the latest tweet and reporting what had been reported on the other network in an effort to tell a story--to make some kind of marginal sense of a horror beyond belief. The people speaking were shattered men and women trying to get a grip on an enormity like no other in this part of the world for a very long time. These were people grappling with horrifying cruelty. And they totally screwed up. But they stuck around, and they told the story of people reacting with love and compassion. These are stories we wouldn't have if it weren't for the media. These are stories that are our story. These stories make it possible to go forward.

Our compassion looks like this. (This is the Edmond Town Hall at the center of Newtown.)


This open-armed, smiling monkey wept in the candlelight. 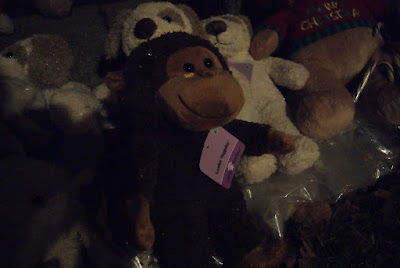 There red-nosed reindeer bore the names of each of the victims.
There were messages from around the country letting the folks here know that they are not alone.
Not alone. Not alone can feel like everything. Not alone can feel like Christmas. Because it is.  Please keep Newtown in your thoughts and prayers.  Please stick around until the sick get help and the armed are disarmed.
Christmas massacre Newtown Sandy Hook