Our World Tuesday: 'Lots of People Carrying Firearms can be a tad Dangerous' 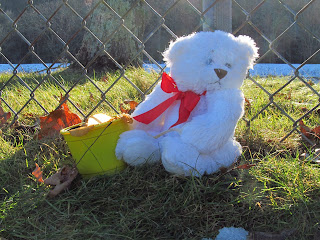 “As thousands of pro-gun activists held rallies across the United States on Saturday, accidental shootings at three different guns shows illustrated the obvious: Being around lots of people carrying firearms can be a tad dangerous.”  --Daniel Politi, The Slatest

At the Hollow Park Sunday with Clyde, Adella and I spent a few minutes at the wreaths hanging from the fence surrounding the swimming hole.  The wreaths commemorate the lives of the 26 women and children slaughtered Dec. 14 by an angry, young, white, suburban man wielding his mother's legally-held firearms.

This week was different from last week, though.  This time around, the sun was out.  The air was warm.  It felt like spring—so unlike last week, when the air seemed to weep for the avoidable loss of so many young and beautiful lives at the hands of one angry young man who lived in a shell until he came out of it and, with his mother's help, presumed the authority and power of God.

The air Sunday was so warm and sweet that we believed for a minute or two that time moves on.  While we stood at the wreaths and Della fixed the toppled teddy bear, I thought, no; we're not moving on yet.  We can’t.

I stood in the sunshine and thought to the day before, when my family and I sat in a restaurant in Madison, Connecticut, and some inebriated older ladies parsed the Newtown massacre.  The loudest of the group of five was the wife of a retired cop who pronounced to her friends and anybody within five miles of the place that the NRA had been grossly misrepresented in the media lately.  We have a right to our guns, after all.   So she said.

Her food and more wine arrived before we had to hear much more, but I heard enough to realize she could have been any one of the scores of commenters on news sites and blogs whenever anything even remotely connected to Newtown or gun control comes into a conversation. Like them, this woman committed the same error of logic.  “Adam Lanza at an elementary school + guns = massacre of babies and educators” is a basic statement of fact.  You can't take the guns out of the sentence and end up in the same place.  Guns are a key part of the problem.  Adam Lanza was armed with guns that belonged to his gun-collecting mother.

Yet, one gun advocate after another has presented the gun as an unfortunate victim of circumstance in the conversation that has grown out of the Newtown massacre.  It's striking to me how little interested these folks are in the families of the victims; they care only about their guns.  Read the comments.  See what I mean.

But then, I am One of Those Liberals and an English Teacher at that.  To the gun-slinging right, I know nothing.  But I am who I am:  a government employee. You can't hurt my feelings.  I just do what I do.

If this whole Newtown debacle had been a work of fiction, my students and I would work our way through it like this:

First off, we'd check out the gun(s).

Freedom how?  I would ask.

The right to defend yourself.

From....?  Remember, the Bill of Rights was the new big thing in 1791.  Right after the Revolution, when our government was a grand new experiment and the danger of absolute power was a serious danger, the idea of defending yourself from a despot was a real need.  The second amendment has to do with militias and democracy.  So that argument isn't really relevant in our age of almighty lawyers and due process.  Things work pretty well around here if you show up and give it a try and vote once in a while.

The second amendment is an anachronism. When you make an argument, context is important.

So, what does a gun represent?  How is it a symbol since the British aren't looking to assume authority over our real estate and there aren’t too many wild bears endangering us?

It is a symbol of power.

Power over what?  What does a gun do?

Of life and death.

Then the power of death.

Who else has that power?

Does the second amendment vest the citizen with the power of God?

So that's no argument for carrying a gun.  Who wants the power of God?

Someone who feels powerless.

How many of those people who feel powerless have employed firearms to protect the freedoms enshrined in the Constitution?

How many victims of the perpetrators of gun violence are a threat to the US Constitution?

Did Adam Lanza represent you when he slaughtered children and their teachers and others?  Was he upholding our Constitutional rights?No.

Bottom line:  Alot of people who feel powerless want their guns to fulfill their willd west-Marlboro Man idea of themselves.   We know this from the last half-dozen gun massacres in our country.

So what do we do?

Update the Constitution.  At the moment it serves the interests of the gun industry, not the people.  We need to fix that.

Get rid of guns.

I’m not finished.  I mean by holding the owners responsible for the crimes committed with their guns.  If your gun takes a life—even without your knowledge—you are as responsible as the person who pulled the trigger.

What would that do?

Maybe get the self-centered gun owners to see that their guns are as much a risk to their lives as to others’.  Just a thought.