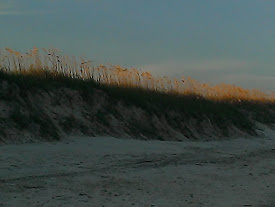 They are the result of the hard work and perseverance of people who care that the dunes are healthy, that the plant life holding them together are indigenous and can the therefore stand the test of time and weather. 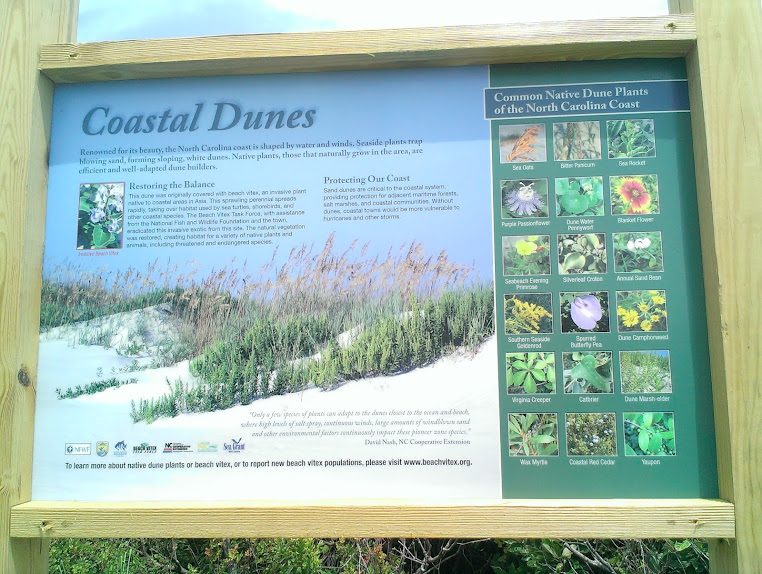 This year, North Topsail Beach has gone to considerable effort to plant indigenous grasses in the dunes to bolster the places that are most vulnerable during hurricane season. These places are the same ones that cradle the eggs of sea turtles.  This is a special, magical, place that nurtures the mystery of ancient life and affirms it at the same time it tolerates fools who can't hold their beer as they hang all over their over-loud girlfriends. Silence, magic, and mystery prevail.  It's cool. 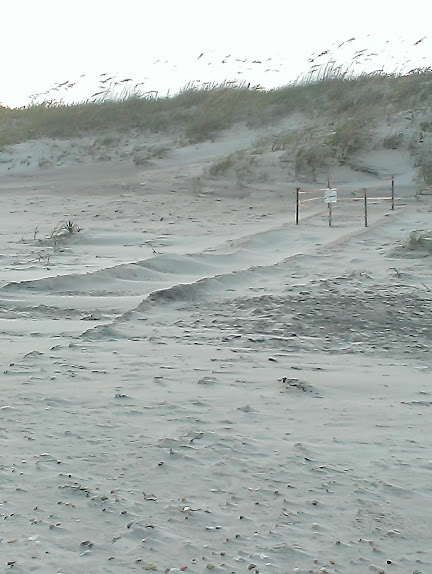 The other day when I saw a boy climb through the dunes rather than use the cross-over just on the other side of his mother, I told him he needed to use the steps to protect the dunes, which are cherished habitat. His shortcut took him right alongside a turtle nest, which was marked off with orange ribbon and a sign admonishing the reader that messing with the nest could result in a pretty stiff fine. The young man was plowing through  recently planted grasses meant to strengthen the dune.

His mother shouted, "Go away, stupid bitch!" She did not speak much English; she was furious that I, a stranger, addressed her child. The cursing, the tone:  I was supposed to shrivel up and blow away.

But I was offended her kid was wrecking the dune and coming mighty close to wrecking a turtle nest. Who was she to come in here and do what she damn well wanted at the expense of all who had worked so hard to create a healthy environment and at expense of endangered turtles?  Who was she to endanger the well-being of this ancient animal?  Ignorance--of English, of the environment, of people who care--was no excuse to justify undoing all the good work that has been done on Topsail.  (I think we all have a moral obligation to know where we are and why and a moral responsibility to take the consequences when our behavior causes harm to wherever we are.  No excuses.)

"Respect where you are!" I shouted back and walked away.