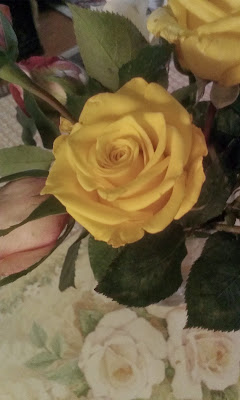 Last Sunday, I went to see an old friend who used to be my editor when I was a small-town newspaper reporter.  She was a tough task-master and an excellent editor, who helped me become an effective writer, She also attended the same university and completed the same MA as I did--though she earned her sheepskin 15 years before I earned mine.  Many of her professors weren't dead by the time I arrived at University College, Dublin, in the mid-1990s, so we could reminisce about or just plain recall some of the same people bumping around the academy back in our days.  When we met up, she had roses for me, and I had roses for her--from the same shop.  She gave me my favorite rose colors--yellow and orange.  I captured this yellow one while I was working at my computer after school one afternoon this week.

My friend and I went to see Philomena, a movie starring Dame Judy Dench that tells the story of an Irish woman searching for the son she bore at Roscrea Abbey when she was a teen-ager and whom the nuns sold to an American couple in 1952.  It's a beautifully filmed true story full of surprises.  Judy Dench does a marvelous job of capturing what it is to be human, to endure loss, to forgive, and to live.  (Click here for a story about the real Philomena Lee.)