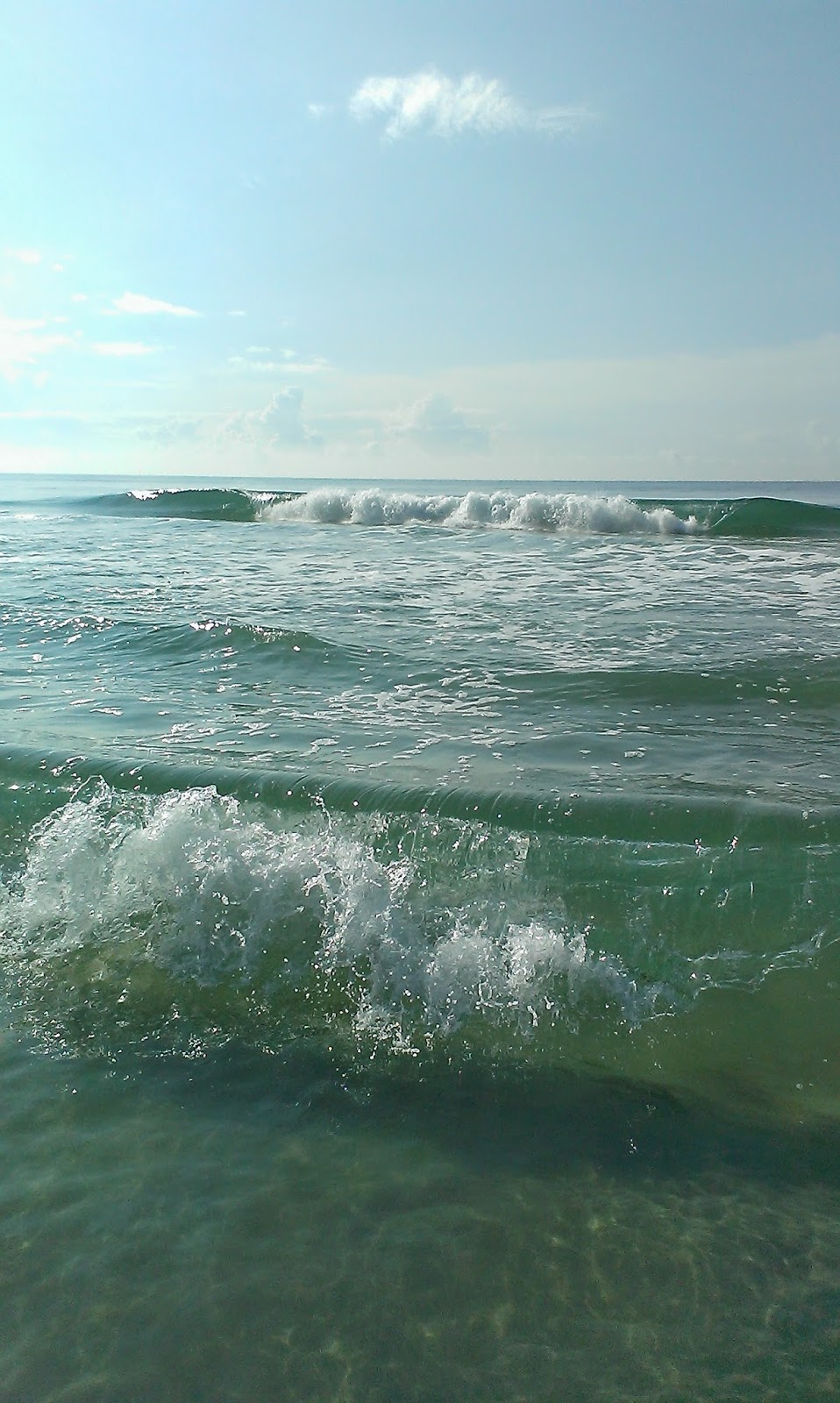 Adella and I went to the beach early Saturday morning.  We were the only creatures with legs on site for a while.  When I stepped into the water, I watched a stingray rise up from the sand and glide through the water.  I was glad he had no desire to meet me.  I stepped out of the water.  We made plans for the rest of the day. 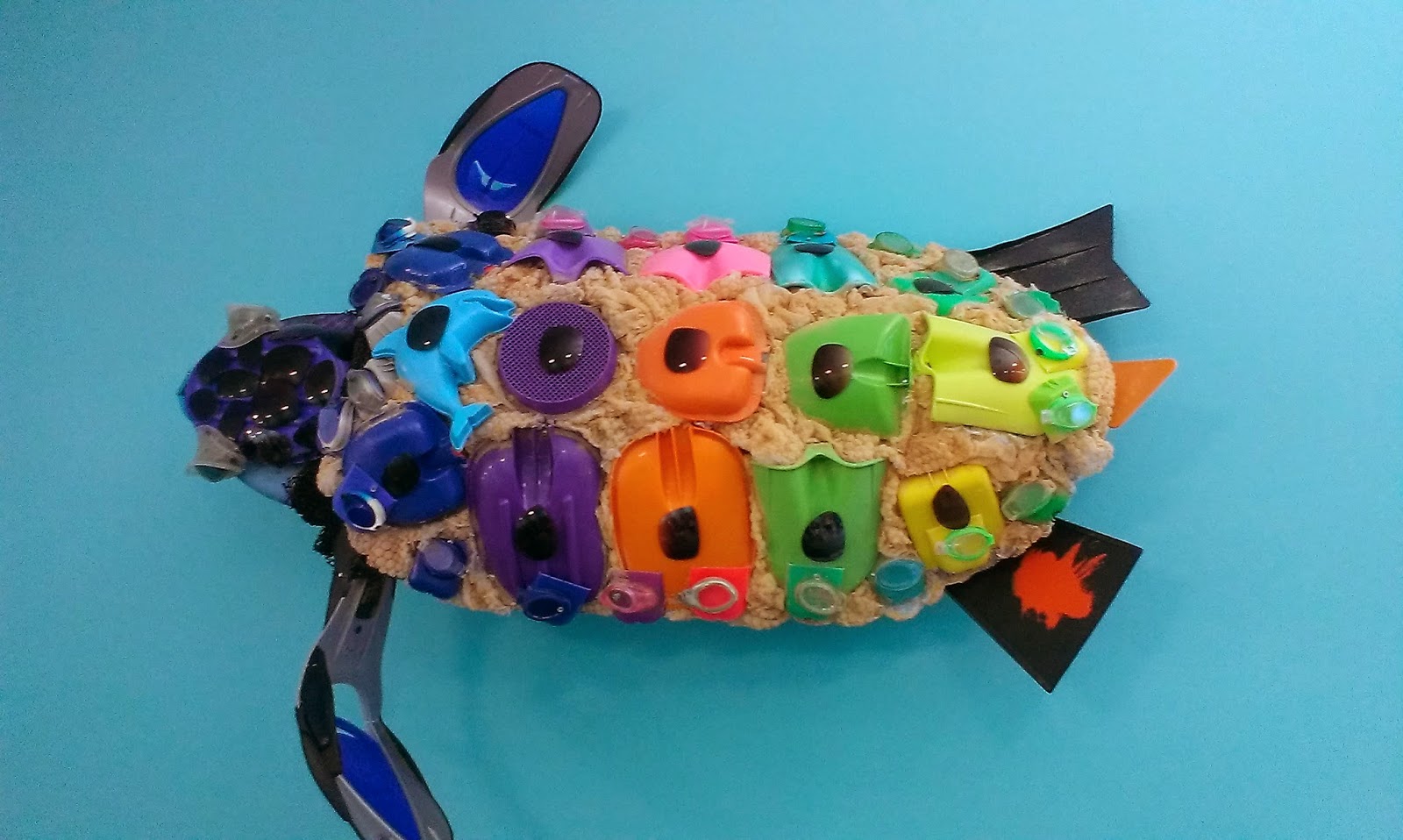 We decided to pay our respects to the Karen Beasley Sea Turtle Rescue and Rehabilitation Center in Surf City.  The hospital is in a new building on the mainland now.  It's much larger than the place they had been using, and it's a lot more comfortable for the turtles, the workers, and the visitors.

While we waiting to see the turtles, we got a load of this turtle made from garbage found on the beach.  He looks like a craft store project, but don't be fooled.  He is made from bona fide junk found on the beach.  Over the years, we have collected countless brand new sunglasses (even Ray-Bans) and sand toys.

Topsail is a very clean beach because every morning there are turtle patrol folks and others (myself included) who pick up what revelers left behind the day or night before.  News flash to the world:  juice box straw wrappers are garbage; orange and watermelon rinds are gabarge; full dog poop bags are garbage; broken beach chairs are garbage; the hot dog and hamburger rolls nobody wanted last night are garbage.  Footnote to news flash:  If you love yourself enough to take a week off and go to the beach, love yourself enough to leave it clean when you go.  The day may come when nobody else will clean up after you.  But back at the hospital.... 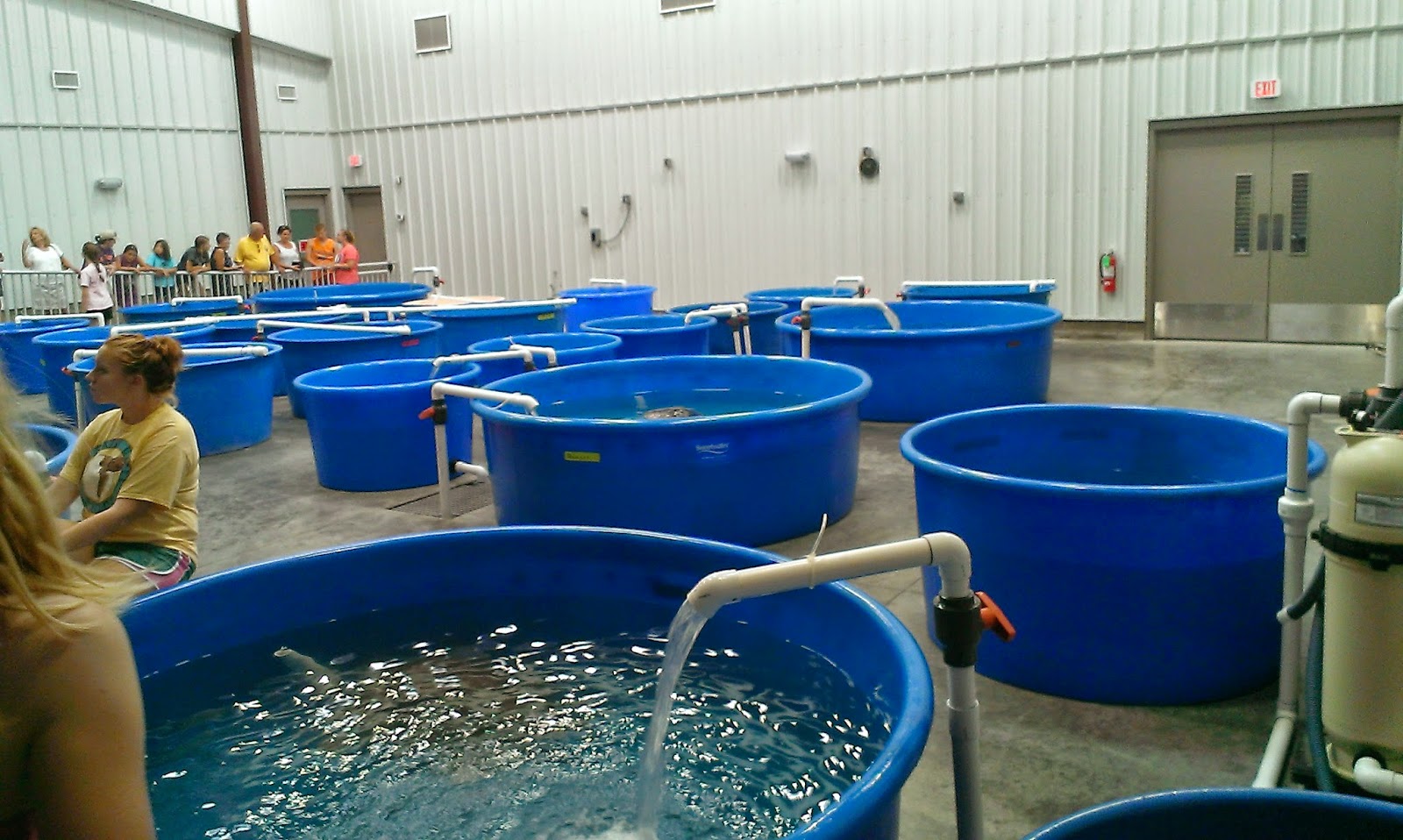 There are lots of turtles receiving incredible care thanks to volunteers and folks who send in money.  There's no other way.  Many of the turtles at the hospital right now were cold-stunned or were injured by boats or were sickened in marinas where boaters had been careless with their fuel and oil. 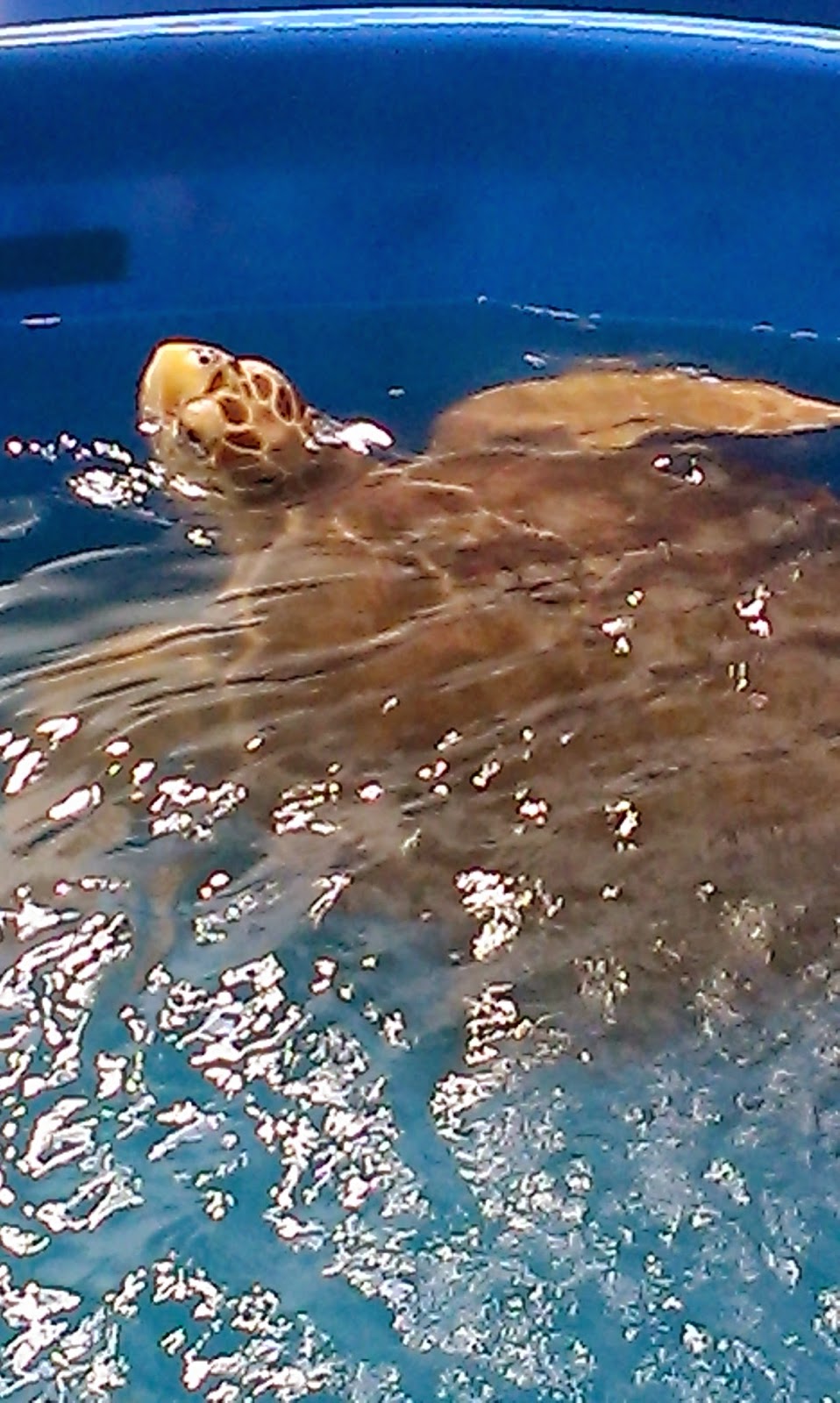 Some have suffered shark attacks, too.  However, most have been sliced open or poisoned by boats. 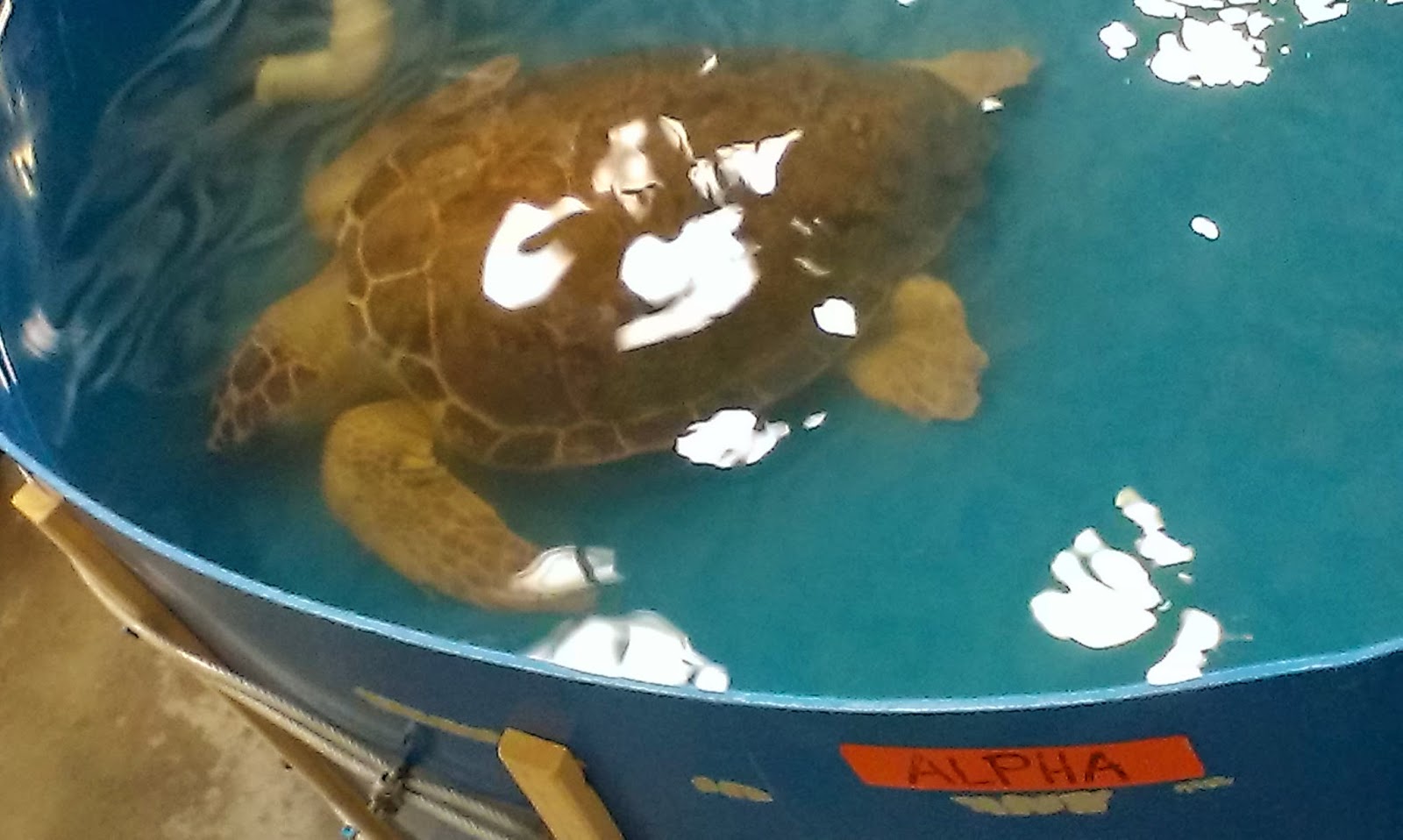 This listless turtle, above, has been at the hospital since last August.  She required a transfusion along with intensive TLC.  Almost a year later, the intern told us, she is still pooping oil. 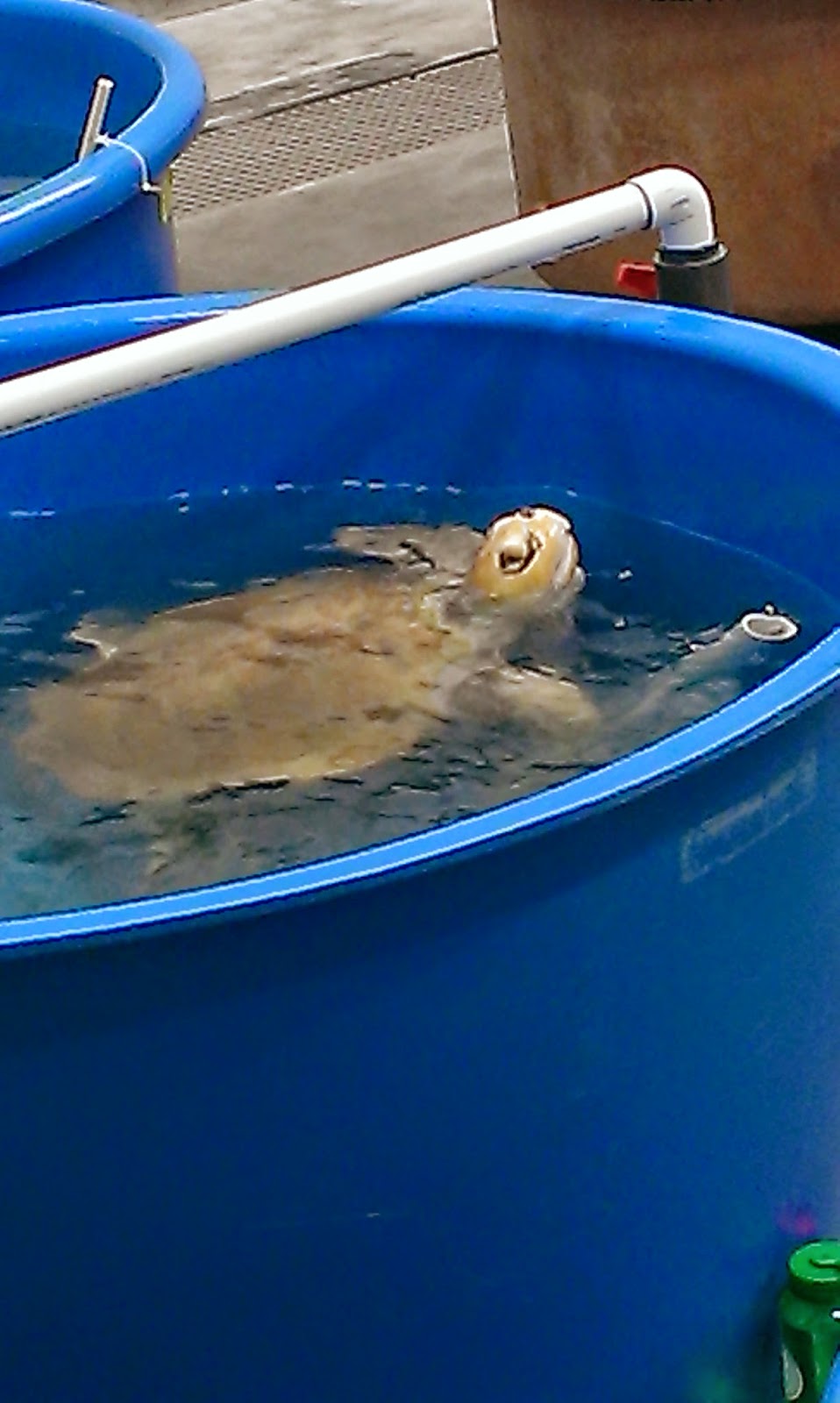 The turtle above is Lenny, a female turtle who is blind and will never leave the hospital.  Lennie was likely blinded by a fisherman who beat her with a gaff hook and left her for dead.  Thanks to another fisherman named Lennie, she has been in the care of the sea turtle hospital, where she will live out her days. 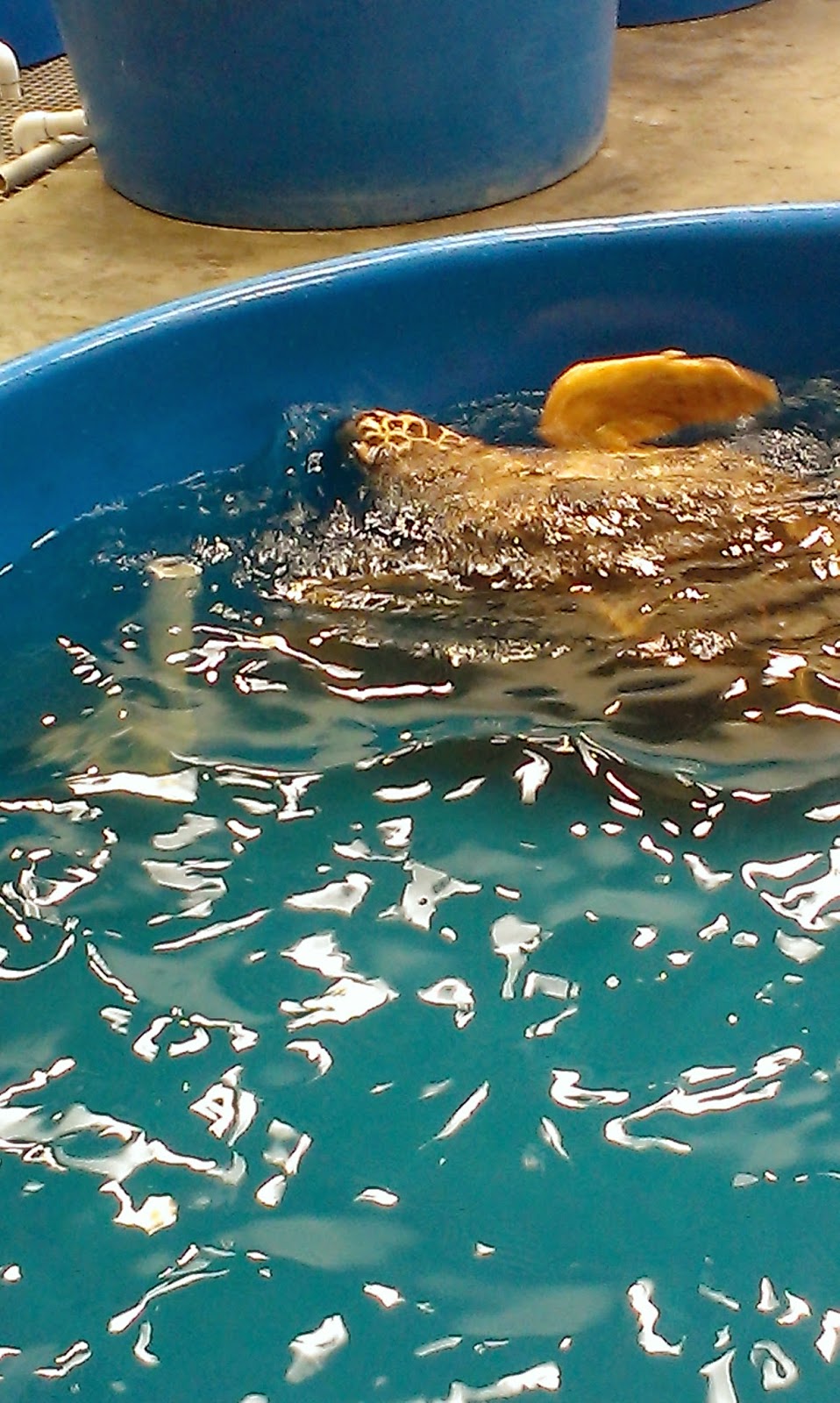 The sea turtle hospital is an amazing place for contemplating the kindness as well as the cruelty of human beings.  The lesson for me is always that we have the ability and power to repair what we break.  The question is always, Do we have the heart?
This brief video captures some of the recovering turtles in the safety of the hospital.