The Beavers are Back in Town; Slow Down and Love Them

After a long day at the end of a strange week, I took a long walk without anybody today.  The dogs found it a tad too chilly to go far with me, so I made my way on my own.  My efforts through the wind and cold paid off.  When I got to the pond, there were three beavers that I could see working hard to slow the flow of the run-off and rain and snow of this week.  When they saw me, they slapped the pond with their tails, dove in, and emerged some place closer to the edge of the water than they had been.  I watched them swim until I realized that I was the reason they couldn't get the work done. 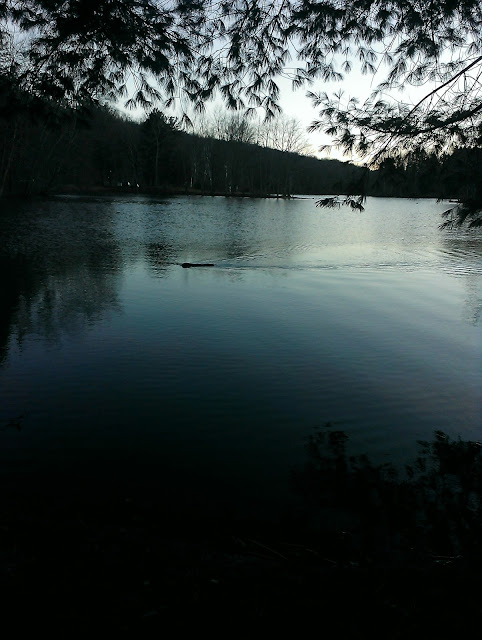 The beavers were big and fat and totally in possession of the pond.  They had attitude, and I loved them for it.  They were so big and so fat that they made me think of their progenitor from the pond from seven years ago, a mammoth marvel of beaverness who,  I have to believe, was the god or goddess of all things dammed.  That amazing individual met the end of her life in the middle of the road one dark winter morning.  Thinking of it still makes me sick.  After this beaver's passing, the Canada geese would stand on the dams as if they were keeping a vigil.  They weren't, of course; they were standing there because they could.

Slow down for beavers and turtles and newts and you don't even know what else might be crossing in front of you.  Love life; watch it take shape before you.