By SandyCarlson - May 30, 2016
Here in Woodbury, the speakers were not working when the Memorial Day keynote speaker, a WWII veteran of the Pacific theater  who saw Hiroshima shortly after the bombing, shared his thoughts with the town.  His bottom line:  The bombing was necessary because it saved American lives.
This, from a gentleman who was part of the armed forces in the Pacific theater at the time of the bombing but who had no idea what the US had done.  He knew only that he was an American and that the fight was a  good fight. 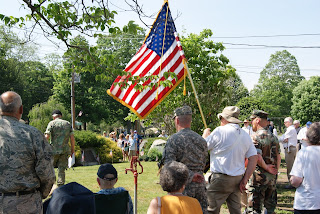 I cannot argue with an elderly gentleman in army dress on a 90-degree day telling me that a specific military move was necessary.  Nor would I-and not only because I was raised to respect my elders.  I was never taught the knee-jerk respect that asks no questions.  I was taught the respect that is based on humility that reveals itself in the willingness to hear what my elders have to say and to appreciate that my experience, whatever it is, is less than that of my elders.  This is the fate of children brought up in the shadow of World War II.  This is a just fate.
The soldier who spoke did not apologize for Hiroshima or Nagasaki or the time of day. He said how  it was from an American perspective.  We did what we had to do to protect American lives.  That’s what soldiers do.
And I may be so bold, that is what our biracial Commander in Chief’s mother did when she got his young butt out of bed at the crack of dawn to do his homework and to study his lessons.
Barack Obama is not our President because he is half black but because he did his homework.  He did not apologize to the Japanese people for Hiroshima last week.  He had nothing to apologize for.  America was not the aggressor in World War II.  We fought hard and won, and then we rebuilt the word.
Fault-find if you must.  Many do and will and won’t be stopped.  Nobody has the time to worry about it.  But as for me and my house, we will learn from history.  We will be formidable, and we will be just.
My heart full of gratitude goes out to all who ever fought for freedom.  Every day in my classroom, I strive to return the favor.  You set a high standard, and I strive to meet or exceed it.