The Common Core, the People, and the Truth about Us

By SandyCarlson - July 20, 2016
My family and I are about to turn the lights out after three mind-numbing hours of the Republican National Convention. To hear a commentator praise Scott Walker's speech for introducing a new chant to the crowd is to hear the new definition of the very bottom of political discourse.   (The highly trainable crowd picked up on the new chant after only about 10 long minutes of the speech.)

As I prepare to close the lights, I can't help but think of a TED video I almost watched about how Hitler rose to power.  I didn't watch it because I knew what would be on the TV tonight.

Among the luminaries speaking tonight was a bleach-blonde Florida woman whose husband stays home to home-school the kids because she will not submit them to the Common Core.  As if the Core were the iron maiden.  Honestly.

I am an English teacher, and I know the Core standards for English very well.  First and foremost among  them is the ability to cite evidence to support an idea.  Here are the first three for literature:

CCSS.ELA-LITERACY.RL.9-10.1Cite strong and thorough textual evidence to support analysis of what the text says explicitly as well as inferences drawn from the text.
CCSS.ELA-LITERACY.RL.9-10.2Determine a theme or central idea of a text and analyze in detail its development over the course of the text, including how it emerges and is shaped and refined by specific details; provide an objective summary of the text.
CCSS.ELA-LITERACY.RL.9-10.3Analyze how complex characters (e.g., those with multiple or conflicting motivations) develop over the course of a text, interact with other characters, and advance the plot or develop the theme.
In even plainer English, these standards are asking freshmen and sophomores to support their thinking with evidence, to show they know what they are talking about by incorporating evidence, and to come to rational conclusions about a text based on evidence.
These standards are about good citizenship.  When our kids leave the classroom, they should have developed the ability to explain their ideas and to believe that they must be able to do this before they can behave in public discourse.  Before is an important word here.
You have no right to open your mouth until you can explain your thinking with sound evidence.  To do otherwise is to reduce this democracy to a rubber room.
I am in no way surprised that Trump wants to scrap the Common Core.  He has not backed up any one of his assertions with solid evidence.  Instead, he has resorted to insults.  The elbow in the face can make a compelling argument.
In other news, Trump's education platform includes the idea that the Bible should be included in public school curriculum as literature.  Big news for Donald:  It's already there.  English teachers have been discussing parables and biblical allusions for as long as there has been Western literature.  Of course, Trump's idea has less to do with promoting Christian values than it does with smacking non-Christians, but that's no surprise.  His cultural illiteracy isn't news to anyone.
Back to the Common Core:  These standards are the work of educators from across the country at every level of the education profession.  The Common Core is the product of Americans cooperating to make America great.  The Common Core is also an artifact of a time when President Obama believed great things were possible through collaboration.  President Obama, a great student of American history, underestimated the cynicism of a man who doesn't quite appreciate that quoting the wife of your enemy is as good as admitting your are intellectually bankrupt. 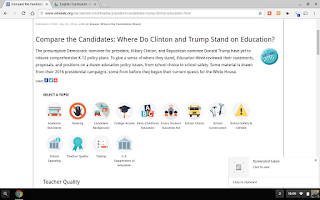