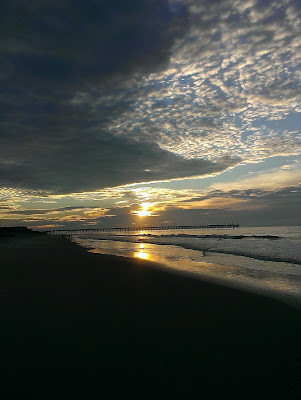 A few years back, I met a turtle lady who had given up her day job so that she could be free to sit turtle nests into the late night during the summer and fall.  She decided to clean houses so that she could set her own schedule and be free to do what was important to her.  She was following her bliss; to this day, she is my hero.

I have witnessed and helped with a few hatchings over the years, and I had hoped to be a part of at least one this year when my daughter and I returned to Topsail for a week.  It’s a profoundly wonderful experience--one well worth the sacrifice of a day job. 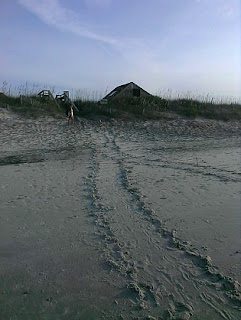 This summer, sea turtles created 144 nests on Topsail Island, a sea turtle sanctuary off the southern coast of North Carolina.  When Adella and I arrived last Sunday, we met two turtle ladies and a neighbor, who were on their way back from assessing a nest that had hatched three days earlier.  They told us they had found 18 unfertilized eggs, a number of pips (hatchlings that died while climbing out of their shells), and one straggler who made his way to the ocean to join the other hundred or so who had embarked on the journey on Thursday night.

The turtle people were excited about the straggler who made his way across the threshold to the next stage of his journey.  My mind got stuck on the little guys who never got out of the shell, though.  I tend to dwell on the fragility of life rather than its tenacity.  The turtle people help me to focus. 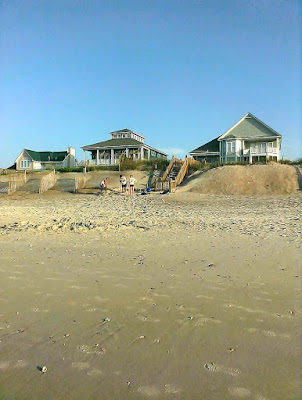 The turtle people are a blend of retired and working folks from all over the country who are on Topsail for their love of the sea.  They walk the beach both morning and night every day from spring until Halloween.  In the morning, they are looking for evidence of new nests and cleaning up litter.  In the evening, they are watching the nests, building ramps to give the hatchlings a swift and safe journey in the surf, and educating passersby who have no idea how the whole mysterious business works but are happy to know it does.  These ladies and gentlemen are the midwives of the ancient, venerable turtles in an open-air birthing center.

And they’re all nice people.  It was our pleasure to join them for a few nights of watching a nest that everyone there knew darn well wasn’t likely to see any action for a few more nights.  It takes a turtle egg about 60 days to mature into a turtle, but the midwives were there on day 53.  Like the lady who gave up her day job to support the turtles, these people give up--invest--their time to honor life.  It’s really that simple. 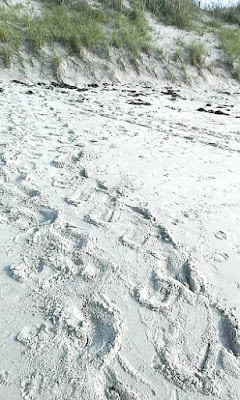 Our neighbor was one of those turtle watchers.  He was also the guy who found the nest because he had come upon it early one morning when the mama turtle was laying her eggs.  He had caught the whole thing in a very blurry, profoundly beautiful, video on his phone, and he showed off the clip like a properly proud grandpa.  Turtle people love life, and they turn into little kids in the face of the mystery of life and the sea and the sun and the silence and waiting.  They believe in the Santa that affirms life by letting it happen and bearing witness to the process.

The nights we were at the beach, we watched the moon rise, slow and slumbrous, orange and, it seemed, so full of the tide that it could not rise above us.  We searched for the Little Dipper, which seemed to be missing from its usual location at the end of the big one.  (We figured we’d find it eventually.  Or not.)  We found Saturn and Mars and the Milky Way and a bazillion nameless lights we might have tried to touch, they were so close.  Heat lightning illuminated the clouds, we talked banal things and otherwise said very little.  And we waited, sure in the knowledge the turtles would not come. 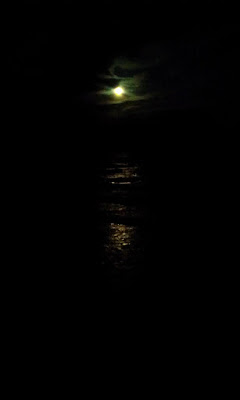 When lightning struck downward, we left the beach, repeating aloud the wisdom that if the turtles would hatch that night, they would do so without us.  Mother Nature didn’t need our help to do what she had been doing since way before the dinosaurs, anyway.

Is it crazy to be deeply invested in a process that runs completely independently of you?  To show up where you are completely unnecessary and to wait and to hold on--and to come back between thunderstorms, as our neighbor did--to be a witness to the magic of life without any personal material gain?

I believe it is not a matter of being needed or even relevant.  Rather, it is a matter of bearing witness to what is relevant when we strip away everything else:  life is.  Life insists on itself.  And even as we melt polar ice and drown sections of our own country through the combined neglect, ignorance, and greed that manifest themselves here and now as climate change, life goes on.  Even as the human race drowns itself, the turtles swim home.  And they will be back.


We sit beside the turtle nests because we cling to life, which has no need of us.  We sit below the planets and the stars that are not within reach and will light the night sky long after we are gone because they tell us to let go.  Between the turtles and the stars, we make friends.    That is our story.