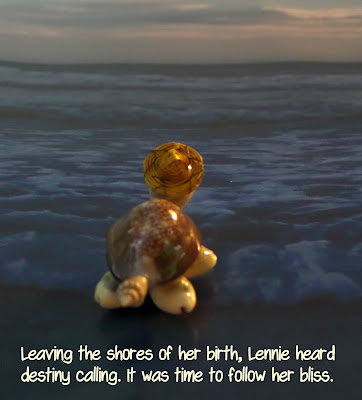 A dear friend who visited the Black Sea following her summer vacation with her sons and her mother in Transylvania brought home this sea turtle fashioned from little sea shells. She gave him to me and said he made her think of me while she was away.  I put the turtle on a photo of Topsail that Adella had printed for her dorm.  I have been immersed in the works of Joseph Campbell this summer, so his ideas informed the text, which Ed added for me.

As Adella has gone off to college to follow her bliss, I have been wondering about mine.  And thinking about turtles on the beach.  And I have been wondering about those turtles, so many of whom have emerged from their nests without the witness of tender-hearted retirees and vacationers because the storms and the lightning have made the beach at night a secret, primordial space.

Who goes there?  Indeed.