Poseidon's My Guy Because He Hurts 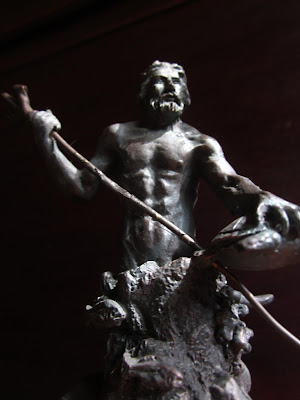 I have been thinking about Poseidon and how he comes across as the petulant brother of Zeus out to get Odysseus because he can in The Odyssey.  He is an outlier on Olympus when The Odyssey opens.  He’s the god who has it in for the mortal who beat up his kid, Polyphemus the Cyclops, and then laughed in his face.  What’s noble about a guy acting out a grudge?

Answering that requires knowing something about Polyphemus, the Cyclops.  He’s on his own little island with his sheep and rams and feta cheese all stored for his private use in his cave.  When Odysseus and his crew arrive on the Cyclops’s unexploited island, they basically raid the guy’s refrigerator.  This is a gross violation of the celebrated virtue of hospitality.  Once the Cyclops understands that he has been invaded by these mortals, he eats a few and then a few more and holds them hostage.  Odysseus finds a way to outwit the guy--he blinds him--and get the rest of his men out, but the Greeks are guilty of taking advantage of their host.

In this moment, Odysseus is no better than the suitors preying on Penelope, ready to slide themselves into a role earned by another man.  It’s worth noting that Penelope has way too much character to roll with that, and she defends her honor, and therefore Ithaca, with everything she has.  Penelope, the weaver of tapestries, controls the narrative.  She’ll say who climbs into her bed at the end of the day.  If Odysseus is no better than the losers eating him out of house and home, then the questions remains, What does Odysseus have to do to earn the right to come home, to climb into his rooted bed with his noble and honorable life, to realize the deep bliss of being himself? How does he stop being the Cyclops--the myopic, narrow version of himself focused on satisfying his appetites by focusing on his suffering rather than on his purpose? In blinding the Cyclops, he refuses to see the truth of what he has become. His ego rules the day. And Polyphemus promises him that Poseidon--his father and their father--will put paid to this transgression. In other words, Odysseus has a lot to learn before he can achieve atonement.

Poseidon basically he kicks the fight out of Odysseus by sending one wave after another to crash over his head when he is in sight of land, when getting home might otherwise be a matter of waiting.  Poseidon makes Odysseus earn the right to go home.  He makes Odysseus face who he is and give up who he is by challenging him to survive gruesome storms at sea.

When Odysseus lands on the shores of Phaecia, he is naked and exhausted.  He is nobody.  But Athena steps in and conjures the circumstances in which he can discover himself and present himself in all his glory to the people of this island. They are so impressed, they help him get to Ithaca.  That glory is his character--his identity--that he earned through life.  There are no favors here.  No earned privileges. Here is the opportunity for Odysseus to find in himself those better qualities that originally earned him the favor of the gods.

The Phaecians get me.  They bring Odysseus home because they respect him. They are kindness incarnate.  They don’t have the whole story. They can’t point to decades of interaction to justify their helping Odysseus. They engage him, they see his character for what it is, they feed him. Then, they give their gifts because that’s what they do. Their kindness gets Odysseus home. (Poseidon later punishes them for it, but that's another story.)

Odysseus knows he made a promise and will travel far to tell the tale of Poseidon. He’ll do it.  He will tell the tale of going home to find yourself because that’s what the good fight is.   The Trojan horse is nothing but a sideshow on the road of figuring out what is important.  Poseidon makes sure Odysseus is worthy of telling the tale.  He cannot say he saw anything.  He must say he lived it.  His being able to do so makes his reunion with Penelope an exquisite night that precedes the dawn of his fulfillment.

Odysseus learned from Tiresias in Hades that he was obligated to travel to a place where people did not know of the sea and the make sacrifices to Poseidon.  Odysseus knew he must venerate his very own soul with humility for the circle of his life to be complete.   So he does it.  This is what makes Odysseus a hero:  He lets his most worthy of adversaries kick the nonsense out of him to earn the right to go forward and declare the value of the experience.

Poseidon makes you go there. He is the pulse of life. He insists we be honest with ourselves and then act. He makes Odysseus think hard about what matters. Because, actually, Poseidon (lord of the subconscious who moves and shakes the Earth) is Polyphemus (one abounding in songs and legends) is Odysseus (the smooth-talker). The rest is kindness and history.