Heading for the Woods While the Emperor Parades his Nakedness 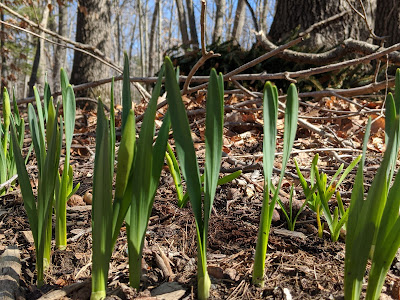 As the emperor runs around with no clothes on and his minions continue to lack the courage to throw him a robe, Covid-19 continues to paralyze this nation.  Ironically, the demographic group most likely to support a second round of deceit, depravity and the destruction of every American value are at the greatest risk from this scourge.  But they won't stop dancing!  Meanwhile, the daffodils are shorter than usual as the battle the warm-again, cold-again of climate change. 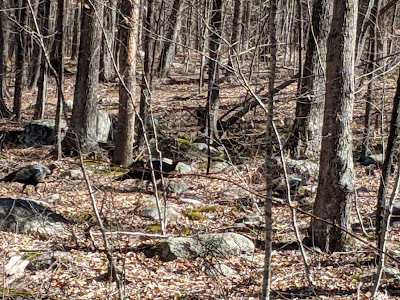 At home because of a Covid-19-induced hiatus from my classroom, I took a walk in the woods and came across this rafter of turkeys.  They shuffled their way at a decent pace, pausing only when I made a loud step on a raised segment of the path.  They froze, and I froze.  Then all of us moved on. 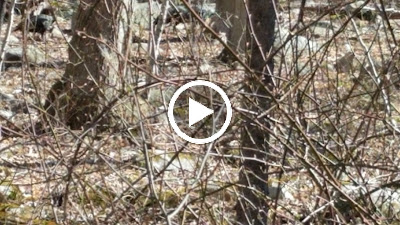 Of course, I took some video to share the moment back home.  Life goes on beyond the screen.  By the time this enforced time off is over, my vision might self-correct.  I might even be in better health, stronger and leaner than before this mess started. 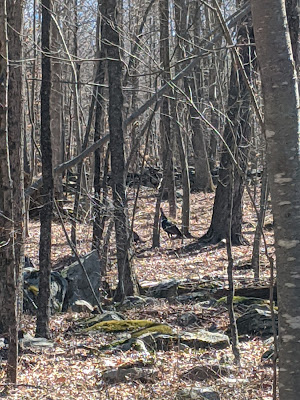 This guy was going his own way.  I admired that. 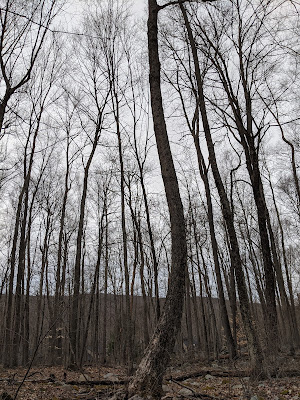 English teachers in the woods will find their metaphors.  This tree curving toward the sun is mine.  Something happened to cause this tree to grow out of the earth at an angle and then correct its course for the sun.  It's a fine, stable tree doing what trees do. 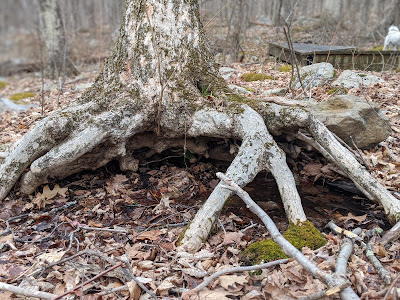 Here's the metaphor:  A perfectly sound root system that grew beyond the challenge of the wind into these deep-reaching fingers.  The space between the tree and the ground is now habitat.  Lots of peepers are starting their lives in that rich, cool, protected space.  Lots of trees live such lives:  they are themselves, and they are home to myriad creatures who find their space or will their way into one.  None of that sharing or invading stops the tree. Is this socialism--sharing what you have so that everyone has what they need?  I don't know, but it works in the wilderness. 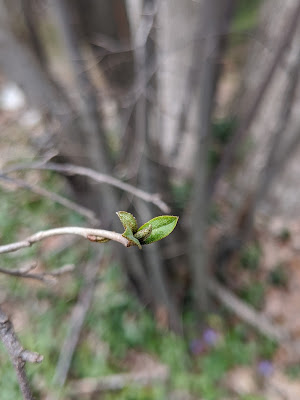 Leaves?  In winter?  Yes.  Climate change?  Real?  Yes.  Everywhere.  On a warm day when the world is sneezing and wheezing its collective head off, it's hard to avoid being charmed by the early gifts of a climate-changed-rendered spring.  But we don't have enough blankets for all these trees if that wintry mix comes on Tuesday. 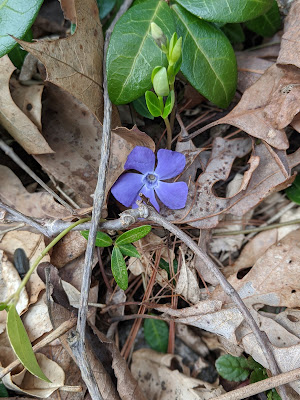 Flowers in winter, too--the kind that usually emerge around the time of prom.  Which is to say late April, early May.  Except that the governor has wisely prohibited gatherings of more than 50 people for the next eight weeks, and prom is April 25 in Litchfield.  Oh, dear.  Maybe we can fly the kids individually to Mar-a-Lago where reality suspends itself in bronzer and hair gel, denial reigns, and, we hear, the chocolate cake is the best in the world. 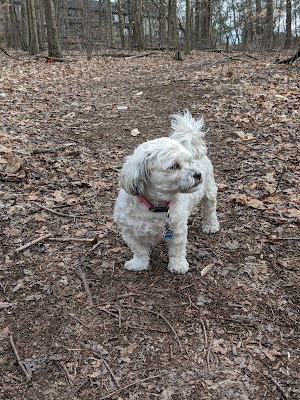 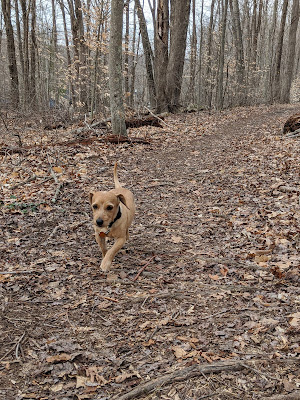 Or we can hang with Maeve and Floyd in the real world, keeping that safe distance from each other, of course, and far away from the naked emperor whose downfall will return the kingdom to the people and the ideals of civil society that they hold dear.