After her high school graduation, my mother received pediatric nurse training at the Foundling Hospital in New York City, an institution founded by the Sisters of Charity that continues to serve the most vulnerable members of our society:  small children in need of familial love. 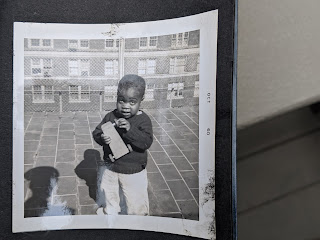 Mom often talked about her time at the Foundling with affection and humor--the strictness of the Sisters of Charity, the stink of smelts on meatless Catholic Fridays, the fun she had with her friends.  There, she learned to crochet, among other things.  This was a skill she would take home to Darien, Connecticut, and teach her mother.  Maybe this is a footnote, but I think it belongs in the paragraph:  Here was a young woman at the beginning of the sixth decade of the last century moving to the City to learn a skill and immerse herself in an experience wildly different from her own--the experience of being unwanted, poor, and not white--at the same time learning a refined ladylike home art.  Mom was a renaissance woman, a marvel. 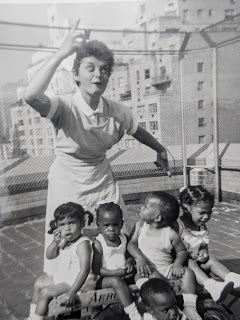 Mom would talk about a little boy named Jimmy. She was very fond of this child, who called her Mama Sandy.  Among the things Mom left behind for her us was her photo album from her time at the Foundling.  And there is Jimmy in snapshot after snapshot.  There is a little girl, too.  Her name escapes me, though it never escaped my Mom.  And there are photos of nurses in training hugging and loving these kids. My Mom is in maybe two shots.  One I can’t be sure of because the woman’s head is down.  But the ones I can be sure of capture Mom in all her fun and loving glory.  The children are gathered in a group and Mom is smiling and pointing upward.  She is trying to get the kids to look up and smile.  This is not that letter-perfect group shot that makes it to the annual report.  This is my Mom being real with kids.  And there is the photo of her holding Jimmy.  It is October 1960, just months after Mom’s high school graduation, and there she stands in this fenced-in rooftop play yard holding this formerly cast-off child with love, pride, and courage.

I have this photo memorized in my heart.

There is another detail about this that has tattooed this part of my mother’s life to my soul. 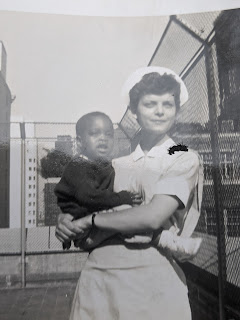 In the sacred randomness of discovering a departed love one, I discovered my mother on an index card she kept in a tote bag that held a Chromebook I gave her so that she could do video chats with her grandkids.  (That never happened, but she used the Chromebook for a while.)  On that card she had a password to some account or other.

City children.  Helpless and newly born black and brown babies in need of love and in need of family.  My mom gave many of those children that love.

Forty-one. The year she was born.

Destined to love the unwanted and rejected.

Mom’s daughters would become servants in public school systems.  My sister works in guidance in an urban district.  I teach English in a suburban one.  In my role, I teach students to speak and write with their own voices, to have their own ideas, and to question everything.  In short, I would say I teach them to think like city children deserving of love and feeling valued for who they are.

I teach the way Mom taught me to--the way she learned because she dared to show up.