By Sandy Carlson - March 15, 2020
Mom's family has a propensity for leaving notes and clues in hidden places so that ancestors talk to the living across time and place.  This writing on things is as lovely a practice as it is startling.

The other day, I knocked over a framed ink drawing that my great-grandmother penned a very long time ago to find on the opposite side a reading list of art books and my great-grandfather's address.  (Perhaps her address as well?  I don't. know.  But I googled it and found that a very old building still stands. Probably the trees around it were much healthier 100-plus years ago.)

very same cleaning spree, I found my Uncle Bud's note about his younger brother Laurence, a submariner during World War II and the subject of the photo with their father, Harvey Allan Isbell.  The note indicated this was the last time Uncle Laurence was home and that Uncle Bud had asked Laurence to try to get leave one more time from Annapolis before what would be his last tour in the Pacific.  He could not get leave, the note said.  And that was Uncle Bud's '37 Chevy in the background.

Then, there are the notes on the bottom of a little footstool Laurence made as a kid and gave to my grandparents for Christmas.  On the bottom, my grandmother noted where the gift came from and added the fact that her brother Burt was away at camp, and my Mom was four months old at the time.

Mom also left a note behind.  Hers was on a Post-it she left with a sweater she had received from her parents for Christmas when she was 16.  The note is cryptic, as if Mom didn't want to write sentence on that little sticky note.  Mom wore that sweater when she went to the Loring studio to have her picture taken, a gift she made to her grandmother.  Mom is beautiful in this photo with her short, curly hair, smooth skin, and smile that looks like it comes from very far away.  This is a trait of my mother's family:  they smile as if they have lived forever, won't be surprised, and can't be tricked out of loving you or the story they continue with you.  It is a smile that carries wisdom and humility and power.

I also found a footstool my Great-Uncle Laurence made as a Christmas gift to his sister and brother-in-law, my grandparents, for Christmas in 1941--a December that would motivate him to sign up as a submariner and serve in the Pacific, where he would lose his life in the service of the once great United States.  My grandmother noted the gift and the fact that her other brother, Burt, was at training camp, that her daughter Marjorie was five and a half years old and her daughter Sandra, my mom, three months old.  Those notes make vivid and real the War.  I try to imagine my grandmother noting on the bottom of the gift who gave it to her and when and then going on from there, giving the moment context.

I also found the note in the sweater after Dad told me to take them. That was a big job; she had about 60 sweaters. There were the boxy 80s sweaters, the longish 90s sweaters, and the more tailored sweaters of this century.  And then there was that one, stunning black wool 50s sweater from the Darien Sports Shop.  This was a sweater I wore with pride in high school. It has survived years and years of being worn without a sign of wear save a few pills.

The little yellow note tells me not to forget.  The sweater.  Where it came from. A time when having one rock-solid good sweater was all you needed.  The grandparents who gave my Mom what she wanted when she was a kid even though it was expensive.  How quality endures. 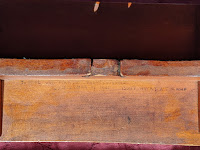 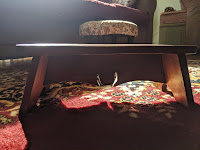 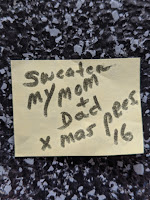 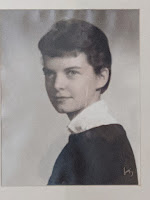