Remembering Mom: What We Make of Things 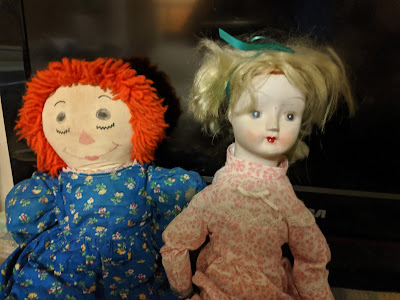 In the four months since my mother passed away, scraps and pieces of her world have drifted into mine as the twin tides of memory and change roll in, sometimes in what feels like a raging gale and sometimes in what is the inevitable stillness of an ordinary day.  I try to add these pieces to the picture I keep in my heart of my good and loving Mom.

Recently, my father has been working on emptying the house in Pennsylvania that he had shared with Mom for a little more than six years.  He has invited me to take what I want to keep so that he can sell what remains and put the house on the market.

Walking through the house last weekend, I felt Mom’s spirit had moved on even if some of her things lingered in the soft late-winter sunshine to be discovered and claimed by her daughter.  I want to keep her story whole, and many of her possessions--woolen rugs hooked generations ago, made from cast-off clothing and burlap feed sacks into beautiful floral bouquets; needlework depicting sailing ships, yellow flowers blowing under a blue sky, birch trees inviting a walk in a yellowing wood, exotic “junk jewelry” fit for an Egyptian queen, worn rings worn with love until death so that they had to be cut from lifeless fingers...and it goes on--contain whole chapters of her story.

On my mother’s bed last Saturday lay a toy bassinet from the 1940s--hers.  Well cared for despite its many years in the hands of my sister, me, and the neighborhood kids who found their way to our finished basement playroom half a century ago, the white wicker basket held my mother’s baby doll, a porcelain doll that came my way one Christmas after I had made the point of telling anybody at all that this doll being advertised in the magazine section of the Sunday paper was just the best--porcelain, prim, and very like the doll that had belonged to my Grandmother when she was a child and that I visited in her attic whenever she let me up there to browse old books--and the Raggedy Anns that my father’s Aunt Mary had made for me  and my sister when we were very young.  We loved those rag dolls with their red yarn hair, floral dresses, and bloomers. These dolls suffered the kind of love that the Velveteen Rabbit experienced over in his storybook:  we had loved their button eyes off and replaced their optics with magic marker circles.  My sister’s doll has two circles that look like they represent irises and pupils.  She had let a higher power--Mom--do the work.  I, on the other hand, did not. My doll has two shiners, thanks to my lack of marker control at an early age.

I brought the girls home.  I will do something with them, but for now I will keep them and love them and wash their little clothes and maybe try to heal some very black eyes with new buttons and fabric paint as I remember the loving and lovely world my mother created throughout my life, day after day.

The bassinet held two generations of dolls:  mother's and daughters'.

I will spend time thinking about these old dolls in a bassinet.  Because I found them arranged in the bassinet the same way they were arranged when my parents were in their previous home in Newtown.  That bassinet moved from one house to the next with those dolls in place.  Moved to a much smaller house, they spent the past six-plus years in a storage space.  The commingling of dolls was important to my Mom.  I mattered to my Mom.  More than I realized.  It matters now.  And it matters for me to think about why I didn’t realize it until now.