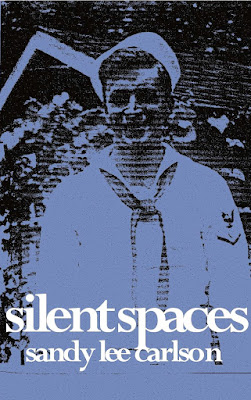 Honoring a Family's Shared Memory of a War Hero

(Woodbury, CT, July 5, 2004) - Woodbury resident Sandy Carlson has published a book of poems entitled Silent Spaces.  The poems explore the way memory--sometimes clear, sometimes fragmented--informs the writer's understanding of herself, her family, and her sense of place.  This collection celebrates her family's love for Laurence Isbell, a submariner who died in the Pacific Theater of World War II.

Secure ordering through PayPal., with or without an account.


"Laurence was my mother's maternal uncle who lived as a legend in my grandmother's home when I was a child," Carlson says, explaining:  "His picture sat on my grandmother's coffee table until long after she died, when my grandfather had to sell the house.  As a girl, I was drawn to the photo of this handsome young man and his beautiful eyes.  Even as a child, I understood my family loved him very much, and losing him was unspeakably painful.  Stories about him were slow to come and brief, and I held onto every one of them."

Carlson adds:  "My grandmother and her siblings were--and are--wonderful people, and I can't help wondering about the great uncle I never knew."  (Laurence's youngest sibling, Gary Isbell, live sin Roxbury, and the oldest, Allan Isbell, lives in a nursing home in Danbury.  The other three are deceased.)
Silent Spaces comes less than a year after Carlson published her first book of poems, Seventeen Park Lane.  That book also celebrates her maternal family.  Carlson says:  "Others' memories become a part of who we are and how we connect ourselves to the world around us and how we value that world.  I wanted to make a gift of these memories to my Mother, Sandy Carlson of Newtown, and my Great Uncle Allan, especially.  He spent a good part of his life trying to piece together his brother's story.  He studied the history of the Silent Service, the history of his brother's U-boat right down to the rivets--you name it.  His efforts to remember, recreate, and memorialize his brother for himself and his family and his family are as beautiful as they are said.  I am in awe of his tremendous love for his brother."

The Woodbury resident has published her poems in small journals around the US.  Most recently she published the poem "Walk Easy" in God's Messengers, What Animals Teach Us About the Divine," compiled and edited by Allen and Linda Anderson and published by New World Library.